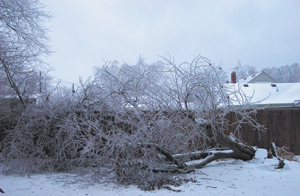 When I woke up this morning and looked out the window I knew that the weatherman had called it right. The Rose of Sharon was covered by a thick coat of ice and its branches sagged with the weight.

I love the snow and an ice storm can stand alone in its beauty. I noticed there were no cars going down the road, so I figured the ice had put a halt to all the normal activities. All our windows on the back porch were completely covered with ice, so I ventured outside to see first hand what mother nature had blessed us with. A thick layer of ice covered two inches of snow on the ground, and my boots made a crunching noise as they broke through the crust with each step.

I took several pictures of the ice covered trees and bushes capturing this beautiful day on film. It was a surreal sight and the sound was what stuck me the most. A stillness that one only experiences in the middle of the night. The sky was light gray. No sign of individual clouds, just one big cloud covering the entire sky. Everything shimmered as it reflected the little light that was there.

The young trees were sagging with the weight of the ice, giving way for gravity to pull their limbs to the ground. I knew that they would survive to see another spring. But the acres of mature trees behind the house were experiencing something completely different. Every few minutes the stillness was disrupted by a crash, as a limb or tree would fall. It was an eerie feeling to know those old trees could not withstand the weight of this world one more second, and with a mighty crash, down they came, taking with them all that was beneath.

As I stood there, the sound would draw my attention in one direction and then another. I heard the crashing and wailing of the forest, as if it were morning its death. Some fell with the sound of a mighty shot gun blast and some would fall with a long creaking crackling noise that seemed to last forever as the moan shuttered through the woods. Then as they hit the ground there was a mighty boom, and then followed by the crashing of all the other branches which were pulled down with them.

There were sounds like thunder, high pitched squeals, rumbling and moaning and some sounds that had never before reached my ears. It was the sound of death of the old, the brittle and inflexible. It was the sound of dying that we would like to turn away from. Then I realized that I am projecting my own fear of death on to the trees. All of nature knows that there is no death, just the natural cycle of life. The old must give way to the new. It is essential to life itself.

This planet has cared for itself long before humans set foot on its soil, and it will continue to do so long after my own body has turned to dust. With this new perspective, my sadness turns to joy. With new eyes, I stand in amazement at the beauty of this process that continues to renew this planet that I am blessed to call my home.