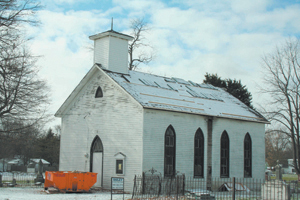 Whether you live in Waynedale or have simply passed through on Old Trail Road, you may have noticed the construction activity taking place on the church building at the Prairie Grove Cemetery. As a member of the board of directors, I thought I’d share with you the exciting changes taking place at this familiar community landmark.

First, a bit of history—Built in the 1850s on ground that was for many years part of Miami Indian chief Richardville’s estate granted to him by way of the 1818 Treaty at St. Mary’s, the land eventually came into the hands of landowner Richard Beck. The church was one of several in Allen County of similar construction, built by the United Brethren in Christ denomination, who, in 1855, purchased this particular one-acre parcel of land from Beck for one dollar. In keeping with the United Brethren mandate that the construction be simple and the seats free of charge, this one-room structure was home to countless services, where the rafters rang with lively praise and circuit-riding preachers proclaimed the undiluted gospel of God’s redemptive love for His creation. Eventually, in 1913, the Cemetery Association bought the church and land from the United Brethren for one hundred dollars.

Through the years, the Prairie Grove Chapel was the birthplace of several church groups, including Avalon Missionary Church and the Waynedale United Methodist Church. I’ve heard many people fondly comment on their “precious memories” of this beloved edifice. There have been inquiries through the years as to availability; however, the lack of indoor plumbing has become thought of as a “negative” when groups have considered using the facility.

Though tragedy struck in March of this year, news of the arson fire prompted many inquiries from the public expressing concern for the chapel’s future and much appreciated offers of help. Doing the math from the late 1850s, one would realize that the church is about 150 years old!

We believe she’s earned her right to stay, is worthy of a facelift, and her restoration has just begun. The first phase includes replacing the roof and removing the chimney and the carpet.
As weather and scheduling will permit, our further intent is to restore her as historically close to her original condition as is feasibly possible.

Realtor and Waynedale native, Glenn Ellenberger, has graciously stepped up to use his restorative expertise in overseeing the project and supervising the band of volunteers who will provide much of the hands-on effort. This promises to be a costly endeavor, and designated funds are limited. Any contributions from the public would be greatly appreciated!

On another note, we have very little documentation of those early years, the late 1800s. We would sincerely welcome the opportunity to carefully view and even copy any memorabilia that the public may have in their possession, perhaps seemingly worthless items stored in the attic somewhere, which may shed light and fill in the gaps of time in her recorded history.

Eventually, we’d like to produce a collection of firsthand accounts you may have of the chapel, to live on for the enrichment of generations to come, a tribute to this beautiful reminder of a simpler time and the timeless message that was proclaimed there.

Glenn Ellenberger can be contacted through his website www.deedsofcompassion.com.