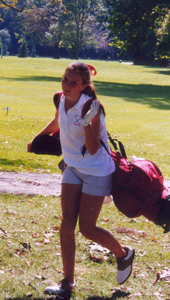 AGE 13-By the summer of 2003 Kristi was probably the favorite in most of the city tournaments she entered in the 12-13 age group. She was medalist with a 44 at the McMillen Park Match Play tournament. She went on to win it, edging long time close friend Jordan Essman of Angola, 3 and 2 in the finale. She won 2 other times, and had a top 3 finish in all 6 tourneys. Then she won her 3rd straight year-end Junior Tour Championship at Foster Park with a 91 (48-43), beating local friend and future BLHS teammate Heather Hendrickson by 4 strokes. Essman finished 3rd. Kristi also won the Grand Prix Player of the Year award again. Now playing 18-hole events at the IGA-PGA State tournaments, Kristi fashioned 2 runner-up finishes but no wins in her 4 events.

AGE 14/Freshman-One more summer before she would be playing High School golf. But over the winter came a major shock. Her pro/teacher Scott was leaving the golf teaching business! Kristi was shocked and disappointed. We all were. Who would we get to work with Kristi? Who would be a good fit? Liz and I knew that the decision we would make could certainly impact her future improvement, her desire to succeed, her love of the game and most definitely have a major impact on whether or not she’ll be able to play in college, should she wish to do so! Liz gave highly regarded golf teacher Bob Kruse a call, a long time Waynedale resident and Pro at Sycamore Hills and Brookwood. Bob said yes! What happened next was nothing short of amazing! Bob really took her under his wing. In just a couple months, Kruse, a former Indiana Golf Teacher of the Year, was turning this young, thin girl’s swing from a good kid’s swing into a beautiful woman’s swing. Soon Kristi would be hitting the ball better-and much farther-than even our wildest imagination could have dreamed!

In her pre-freshman summer, she now would be competing in the F.W. High School age 14-18 bracket. Competing even against graduating seniors, this green kid just out of 8th grade would really be tested. Kristi’s best finish in the Parks & Recreation tour was 2nd place (87) at Brookwood in a playoff loss to Jordan. She finished 6th in the Foster Tour Championship with 92. She did win 2 IGA State tourneys though, the best shooting an 85 at Chestnut Hills, despite 5 penalty strokes and 5 three-putts. That fact showed what a tremendous round it could have been!

Finally High School! In her 1st Bishop Luers match, freshman Kristi was the team’s medalist at Parlor City with 44 despite 2 triple bogeys and 20 putts. Though a nice start, this round would be a prelude of what was to come during her 1st high school season:

Long drives, often leaving a short iron to many par 4’s. But then a poor short game usually managed to sabotage round after round. It was her 1st and only poor putting year she’d ever have. She did, however, shoot a career low 38 at Grey Goose and a 39 at Fairview. Senior #1 golfer Abby Waltke led a pretty good, but young Luers team to a good season. But Kristi’s season was un-eventful.

…Until the SAC Conference Championship at Foster Park. She fired an 80, a career best to this point, to finish 2nd place out of 35 golfers (to winner Sarah Prascsak, Bob Kruse’s other pupil). And though she struggled to a 5th place finish at the Parlor City Sectional, Abby led Luers to a 3rd place team finish, good enough to advance to the Cobblestone Regional. At the Regional’s Kristi refound her putting touch, never missing a putt inside 10 foot. She shot a team low, solid 82 (only missing out on a state finish berth by 4 shots), and finished 12th out of 57 kids. Kristi’s season average was 43.6, just a fraction behind Abbey. She was the only freshman named to the All-SAC team. Abbey, also a St. Therese grad, was named both All-SAC and All-Area.

AGE 15 / Sophomore – In 2005, Kristi set up her summer golf schedule around the IGA Indiana State Jr. Tour, and just played a couple local Parks & Recreation tourneys where her schedule allowed. She won twice in the IGA, shooting an 80 at Zollner in Angola, and 82 at the Plymouth Country Club. She also fired 78 for 2nd at Stoney Creek.

But it was the Bishop Luers season where it all started coming together. At Grey Goose, she won her 1st ever High School Tournament, shooting 80. Then, only 2 days later, she won the talent-rich Northrop Invitational, firing 77 to break Sara Ruzzo’s BLHS school record of 78 back in 1990. More importantly, Kristi showed she could compete with-and sometimes actually beat-the area’s best golfers like Sarah Prascsak, Lina Pasquali, Ashley Rohlfing and Racquel Hopton. Raquel, now a junior once beat Kristi by 31 strokes 5 short years ago in a Pee Wee tourney! Kristi led her young 7-4 Lady Knights to two strong 3rd place team finishes, in these 2 tourneys, and an upset of undefeated Snider. There she shot 38 for medalist honors, out dualing Hopton in a head-to-head match at Fairview.

Kristi’s confidence was growing by the week! In the Timber Ridge Sectional, featured was an Annie Oakley shootout-only with golf clubs-on the front nine. After 5 holes, 3 girls were all 1-under par! Senior Ashley Rohlfing, Kaylee Imel (a solid freshman playing her home course), and Kristi. But Kristi stayed hot going 3 under par after 7 holes. She then made great putts on the last 2 holes for bogey-par to shoot 34-another school record. Though she struggled with tree troubles on the back nine including a triple bogey on #16, she finished birdie-par on the final 2 holes. She shot 76 to become Bishop Luers 1st SECTIONAL CHAMPION by 2 strokes over Imel. This would also be the start of a new rivalry, though a cordial one, between Kristi and Kaylee.

Kristi then finished her magical season by firing 78 at the Noble Hawk Regional, even though starting 4 over in her 1st 4 holes. She won 3 tournaments out of 7 entered. Only Sarah Prascsak matched that total in N.E. Indiana.