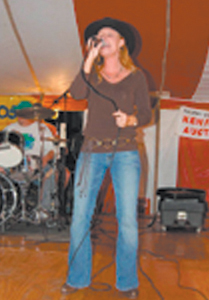 Local singer Julie Hadaway knows what it’s like to reach for the stars. Two years ago the country singer brushed with fame while attending a Martina McBride concert. The performer and fan held up a sign requesting to sing with Martina and unbelievably, Julie was pulled onto stage where she held her own on stage with the Country queen. The singer has now been officially invited to share the stage: OPENING for Martina McBride on June 22nd.

Big dreams and hard work are making Julie a star in her own right. Playing lounges and a weekly karaoke show, the singer who released her first CD, Dream, six months ago is rising to the top of her profession. This Waynedale native humbly says that she is, “very blessed.” She credits the support of family and friends for helping her to make her singing dreams come true.

As a child, Julie says that, “My parents were awesome. They always said ‘Believe in yourself. Believe in God. Anything is possible.” Growing up the singer said that she always wanted to be an actress. After adulthood and reality set in, she turned her focus to music.

Overcoming her fear of singing in front of an audience, she tried karaoke for the first time at age 19. “Karaoke. That’s what hooked me.”

Pursuing her passion has not been all roses. The singer, who also teaches at International Business College, was devastated when she faced a layoff from the school. Afraid of this sudden turn in life, she and her husband had a big decision to make: find a short-term job, or focus solely on singing. The pair decided that Julie should stay home and focus on her passion. Julie says, “My husband is my rock. I wouldn’t be able to do this without him.” Grateful for the time to work on her music, Hadaway has proven that hard work pays off. Releasing her own CD, with a backing from John Mellencamp’s drummer, Hadaway is a local success story.

This singer was not even a fan of country music until she was in her early twenties. Julie realized that, “The music was something I could understand. It really seemed to paint a picture in my head. It’s good for the whole family. Parents would not be embarrassed if their kids were listening to it.” As a result, Julie began to admire Martina McBride as a singer. She said, “(Martina) is someone that I can feel good about looking up to. She’s a respectable lady. She’s beautiful without being too revealing. She’s a family woman.”

Hadaway’s lyrics mirror that same appreciation for a beautiful simplicity. In her song, “Hot Summers Day,” she tells the story of a little girl putting money in an offering plate for children in a third world country and the missionary that used it to save a life. Within the song is carried the honesty, sincerity and hope that is the very essence of Julie Hadaway’s career and message.