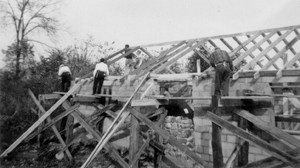 Knowing the history of your community is an interesting and important thing in life. Especially these days when we live in a global village and families fragment and separate to all parts of the world. No longer do we stay close to the “old homestead.”

We are all well acquainted with the work being done at the corner of Ardmore (formerly Hayden Road) and Lower Huntington Road. Who remembers that Lower Huntington used to be called the Ridge Road because it ran on the high ground between the wetlands.

We had a visitor one day when Troop 44 camped at Wayne Carstens gravel pit (now Stone Lake). He was an elderly gentleman from back then in the 1960s. He related some of the changes that he had seen, and he recalled how before the various drainage ditches were established he had anchored his boat and fished exactly where we had our tents pitched.

Most of us remember the Scout Cabin which stood at that intersection and eventually got in the way of what we call progress. But what was it like before the roads extended west to Huntington and north to the Wabash portage area around Lindenwood? Judging from history and with a little imagination it would seem that the woolly mammoth tramped through there sometime. The Scouts did find, and Purdue University team recovered, a mammoth skeleton at Camp Little Turtle. That mammoth head is on display at the Boy Scout Office on U.S. 24 across from Lutheran Hospital.

Indians? We used to find arrowheads all around the Fox Island area after fields were plowed and then followed by a spring rain and there is a reason that a local subdivision is called Indian Village. And I hope that we all remember the Indian settlement, Kekionga, near the junction of our three rivers. Yes, there were many local Indians before the westward expansion of the white man forced changes and even relocation on their culture. It seems almost a certainty that Indian hunting party’s explored those same grounds before the Boy Scouts got there.

Little Turtle is probably the most famous local war chief, but do not forget that Chief Richardville (whose home is located next to the Southwest Conservation Club) was the richest man in the USA at one point. The westward movement continued inexorably and before long General Anthony Wayne was dealing with the Indians in a military manner. And that required the Army to establish compounds where needed. It is no accident that we live in Fort Wayne. And there is Fort Recovery, Fort Defiance, a well-traveled path to the Fort Dearborn area around Detroit and Canadian points north.

Being located in mid-America with the Erie Canal, three rivers, and railroads allowed Fort Wayne to grow dramatically. Before much time passed the roads snaked out to surrounding communities and began to resemble the map that we see today.

With that expansion, farms flourished in the area. But there was a problem with the ground on the Northeast side of the Lower Huntington/Ardmore intersection. It wasn’t large enough to farm, particularly with the creek running right next to Ardmore at that time, and the cereal bowl landscape was prone to flood. This section was part of the Arnold Weubenhorst farm. Mr. Weubenhorst had noticed that the local youth had adopted this land for a myriad of activities. The land was originally given for “the use of the youth of Waynedale” and was eventually deeded to Troop 44 of the Boy Scouts Of America. Troop 44 was quite unique in that it was chartered for most of its career through the Portage Creek Camp Association local civic group that supported the Scout Unit. This type of formation made Troop 44 one of the only units in the nation with this structure.

The Unit was up and running very well in the 1930s and 1940s. Plans were made to build a scout cabin out of railroad ties at one point. But then WWII came along and many members of our greatest generation had to take some time to deal with Nazi’s and Japanese.

The Troop was still quite active during the war years conducting scrap drives, promoting victory gardens, and other home front projects.

Much local effort followed the war years. The Waynedale Lions Club supported this effort and the Troop for it’s entire life. Bill May, founder of May Stone & Sand, donated concrete block and bank gravel. Local truck drivers like Tom Gross and Burt Hetrick donated trucks and personal time for the event and before long the creek was in a different place.

After the first block building went up in the late 1940s/early 1950s there were still some water problems with the area.

Another project followed and local brick mason Hamer “Chick” Mann helped the Scouts elevate the building by four course of block and a new fireplace was installed.

Had the Unit not let one registration slip during the war years the Unit would have been retired with well over 50 continuous years of registration and service to the youth and the community.

As it stands, Troop 44 still retired from the Scout House with well over 50 years of Scouting and service to the youth and community. The Units number designation (Troop 44) is on hold with the Council. There will never be another Troop 44 at Ardmore and Lower Huntington. But there may well be another Troop 44 in Waynedale in the future.

For over 50 years of memories one article just isn’t enough.

In the next issues to come you will hear more about the businesses and individuals that contribute to our Scouting success. Particularly the many adults that make the program possible through their own donated time, sweat, and understanding.