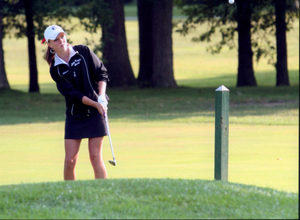 Her 69 in Regional win skyrocketed her to the top

Back in late summer, Bishop Luers Junior, Kristi O’Brien (a graduate of St. Therese) was having the best golfing year of her young life. After a summer schedule around the state, including 6 tournament wins, plus winning the Mountain Dew Jr. Tour Points Championship, she was riding momentum going into the late summer and fall high school golf season. But Kristi certainly had lots of company at the top of the talent pool in N.E Indiana. There was talent galore with the likes of Andrea and Lauren Voght (Dekalb), Lina Pasquali (E. Noble), Kaylee Imel (Norwell), Jessica Sciortino (Homestead), Ashley Kees (Carroll) and close friend Jordan Essman of Angola who shot an even par 72 to win the Belmont Invitational. Then throw in a couple of vastly improved golfers like Taylor Beaty (Dekalb) and Lauren Fink (Concordia), and it seemed there would be a lot of top notch battles on the area’s golf courses. And boy, was there ever!

Kristi, who averaged 38 in Luers’ 9-hole matches with a low of 1-under par 35 at Lakeside, played very solid all fall. Kristi rifled her irons tight into the pins with regularity. Her instructor, Bob Kruse developed her swing into a smooth and beautiful thing to watch! Bob trained this young lady to really crush the ball, too. She’s long off the tee, and when she’s in a rhythm, she often reduces par 4’s to a mere half-wedge second shot. Her putting game is most consistent, and that’s what really separates Kristi Marie O’Brien from her peers.

In the 5 regular season 18-hole tournaments, she finished in the top 3 four times, winning twice. Her 2nd win, in the Northrop Invitational at Colonial Oaks, was most exciting! Playing in the same group with Jessica Sciortino and Lina Paquali, Kristi found herself trailing both linksters down the stretch after bogeying 4 holes in a row. But then parring the next 2 holes, she caught up with them. On their 17th hole (#5), all 3 were tied for the tourney lead. Kristi miraculously holed out a 60-foot chip for an Eagle 3 to take over the lead! She then parred her final hole for a 75, edging Jessica by 2 strokes. She played 2 under par in the final 5 holes! It was the 2nd year in a row that Kristi took the Northrop title.

In the SAC Conference tourney, Lauren Fink and Kristi battled to a tie, both carding 78.  Kristi won her 3rd tourney of the season by birding the 1st playoff hole (#1) at Foster Park. Jessica Sciortino won the Norwell Sectional in a super “come from behind” fashion, shooting 76. She edged Kristi by 1 stroke and Kaylee Imel by 2. More importantly, the underdog Luers girl’s team finished a strong 2nd in sectional, advancing on to the regionals!  In the meantime, Pasquali was firing par rounds to win her own conference tourney and sectional. After an early season shakey start, Lina was now on fire! She was clearly in the lead for the Prep Sports Player of the Year.

Kristi was super-focused, but not at all on that award. She soooooo wanted to go to state, and she knew she’d have to shoot pretty low at the Cobblestone regional. But nobody, not Lina, not Kristi, not her parents, not her coach or even her instructor would have guessed what would happen that very windy, cold rainy day at Cobblestone in Kendallville!

The Regional was loaded with talented golfers. Kristi’s threesome included Lina Pasquali and former state champ, Emily Johnson, the best high school golfer in Indiana. After birding #2, and bogeying #3 and #6, Kristi was in a 3-way tie with her playing partners, stepping up to the 7th tee box, Kristi hit a long straight drive on the par 5 hole. Then she fired a super second shot into the green, resting only 8 feet from the cup. She nailed the eagle putt to go one under par! But there was a long way to go against these 2 senior seasoned veterans. Kristi then reeled off 9 straight pars going into hole #17. But it was still anybody’s tournament. Emily and Lina were also playing par golf. The key to Kristi’s round came at holes #15 and #16. Still trailing O’Brien by 2 shots, her opponents fired at the flags on both holes leaving very makable 10-12 foot putts for birdies. Meanwhile, Kristi missed both greens in regulation. Chipping on both holes, she had to get down in 2 from a long ways away. After her opponents both missed their birds, Kristi confidently made both 5-footers to keep them at bay. She wasn’t giving an inch! Two down with 2 holes to go, Pasquali and Johnson again fired to the pins on the par 4 uphill 17th hole, resting about 10 feet away. Kristi then fired a dart at the flag. After both girls barely missed again, Kristi trickled her downhill 6-footer into the cup for a 3 shot lead! All 3 girls birdied the #18 uphill par-5 finishing hole. Kristi rolled in her 8-foot putt, and promptly leaped in the air! She 1-putted the last 4 holes and played 4 under par in the final 12 holes! She captured her 1st Regional championship over the 2 best golfers around, got her a well earned trip to the state finals, earned enough points to make the girls All-State team and fired her first 69 to boot!! All in one day. Plus, her performance in the most prestigious tournament in northern Indiana elevated Kristi to be named the News Sentinel PREP SPORTS GOLFER OF THE YEAR, sharing the award with her friendly rival Lina Pasquali, at years end.

How about next year? Kristi feels that her entire Luers team can advance to the state finals. Everyone will return including All-SAC, All-Area golfer Heather Hendrickson and honorable mention All-Sac player Haylee Eckert. Much improved players Morgan Tobias, Chelsea Pritchard and Erin  Springer will also lead the way. Lookout for the Lady Knight golfers in 2007!