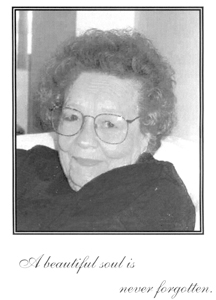 On Friday, May 12, 2006, at 11:00 AM The Waynedale News was at Provo, Utah inside the BYU Chapel for the funeral services of Elma “Pem” Gardner Farnsworth. The chapel was filled to capacity and the service began by reading a proclamation from the governor of Utah. After all the whereas,’ wherefores and therefore’s were read, it proclaimed that because of the tireless efforts of Pem Farnsworth and the great contributions Philo T. Farnsworth made to our culture, a bronze statue of him would be erected at Utah’s state capitol and also a U.S. postage stamp would be printed with his likeness on it.

Pem Farnsworth was born February 25, 1908, at Jensen, Utah. She was the daughter of Bernard E. and Alice Maria Mecham Gardner, and married to Philo T. Farnsworth, May 27, 1926, later solemnized in the Salt Lake City LDS Temple. She died April 27, 2006, at Bountiful, Utah.

Although several large newspapers including one of Fort Wayne’s, phoned Provo, Utah for information about Pem’s funeral, The Waynedale News was there to give our readers an “eyewitness” account. Although I arrived two hours before Pem’s service I nearly missed it after going on several wild goose chases to other campus chapels, but then I met a young man named Joshua McCall who jumped in my rental car and directed me to a campus administration building where he consulted a computer. Joshua got back in the car and personally directed me to the correct location with less than ten minutes to spare.

Josh escorted me into the BYU chapel where we signed the book and he introduced me to one of the LDS Prophets named Henry D. Eyring who was the main speaker. LDS, Branch President, Richard D. LeVitre conducted the services. James Rees Anderson, nephew, opened the ceremony with a family prayer. Prelude/postlude was by the BYU Music Department. The opening hymn was “How Great Thou Art,” The invocation was by Ronald E. Madsen, Jr. Pem’s life sketch was delivered by Russell Seymour “Skee,” a Farnsworth son, who shared this sad story.

In mid July1931, Philo moved their family from San Francisco, California, to Philadelphia, Pennsylvania, to set up a new lab and an experimental broadcasting station for the Philco Corporation. In March of 1932 a profound tragedy struck the Farnsworth family. The Farnsworth’s young son Kenny developed a serious streptococcus infection in his throat and died. As tragic and unbearable as their loss was, the insensitivity they encountered from Philco’s corporate executives compounded their grief. Philo and Pem wanted Kenny buried at Provo, Utah. But the Philco executives said, “No,” they could not possibly spare Philo the time it would take for that trip? They had signed a contract and so that left it up to Pem alone, to make that long train trip back to Provo with Kenny’s casket in the baggage car. Although their loss seemed unbearable, a silver lining later appeared in that dark cloud, Philo went to the University of Pennsylvania Medical College and arranged for a team of medical professionals to carry out research on a new serum that they succeeded in producing and he also designed and built the first isolette (baby incubator), which has since saved the lives of hundreds of thousands of premature babies.

More remarks were made by Linda Farnsworth, daughter-in-law, and then Russell Farnsworth performed another musical number, “1st Prelude from the Well Tempered Klavier” by Bach.

John R. Anderson remarked extensively about Philo’s electronic “fusion” process and made some dire predictions about the future of our culture if it continues down the “fool’s path” of creating tons of nuclear waste from current “fission” processes. Further personal stories were shared by David N. Johnson about recent events at Fort Wayne’s airport when Pem attempted to board a plane without a driver’s license, picture ID, or a Social Security number. Airport security evidently couldn’t tell the difference between a ninety-eight year old woman in a wheelchair and a terrorist?

David also shared this story: “Right up to the last moment of her life Pem Farnsworth maintained her sense of humor. David’s wife whispered in Pem’s ear, “It’s okay to go now if you want to.” Pem got that famous twinkle in her eye and said, “Where are we going?”

Another musical number, “I am a Child of God,” was played and further remarks were delivered by LDS Branch President Richard D. LeVitre and then a member of the “Council Of Twelve” Elder Henry D. Eyring stressed the importance of higher education for young people and also mentioned the Farnsworth fusion project and the impact it might have had on our world if funding had not been withdrawn.

The funeral service concluded with the hymn, “God Be With You Till We Meet Again,” and the benediction was delivered by Ronald Farnsworth, a cousin.

Interment was at Provo City Cemetery and, the graveside dedication was delivered by Jesse Gardner Anderson great-nephew while “Always,” the 1925 Musical Score by Irving Berlin, was performed by the BYU Music Department. “Always” was Philo and Pem’s trademark song they sang it throughout their marriage, they were a duet in this life and they are now reunited in a harmonious eternal duet.