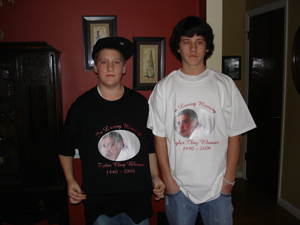 When I lived with my six siblings on Old Trail Road, my father, God bless his kind and loving soul, taught each of us in turn, to drive. My brother, Bill was the first, being the oldest. One of his riders in the back seat relieved the Buick of its door backing down the hill at Marilyn DeLancy’s farm. We sure hated to go home and break the news to Dad. When my turn came, being the second oldest, he taught me to drive. He was just as careful with me to teach me the rules of the road as he was with Bill. Unfortunately, I went to the Fort Wayne Drive-In Theatre with all my girlfriends and we forgot to take the speaker out of the car window. It ripped the speaker off the pole and left a dandy dent in the side of my dad’s Buick.

I remember when he bought that white Buick. So new and perfect. Well, it had to go through seven kids. I don’t know how it looked in its elder years, but we all learned to drive it. And we all managed to damage it. Good ole Dad. He never beat us or grounded us. He got the car fixed and tried to teach us the error of our ways. Every time we left to go out the door he would say, “be careful.” One day his brother asked him, “Bill, why do you always tell the kids to drive safely? You know they are kids and will do whatever kids do.” Dad answered, “Because if something happens to one of them I want to know in my heart that the last words I said to them were a warning.” He always did. I don’t know how we all survived, let alone the poor old Buick, but we all did.

Recently, I picked up the phone and my son, Dan, was on the line. He told me that his daughter’s brother was killed in a car crash. He was only sixteen. Barely. He had been working at a fast food restaurant and had been picked up by a kid who had only a learner’s permit. In the car, also, was the driver’s girlfriend, and another boy in the back seat along with Tyler. As is the case in many accidents involving young drivers, let alone those who are not yet permitted to drive, his tire dropped off the side of the road when his girlfriend yanked the wheel. Why she did this is unknown but, by the admission of all in the car, this is what happened. They hit a telephone pole, a ditch and a tree. Tyler was thrown out of the car, face down on the pavement and was killed.

Many kids were at the funeral, and I took my two grandsons, Clay and Justin. I wanted them to experience what they had never experienced before: the reality of death. You cannot tell a kid that if he screws up, drives too fast, horses around in a car, or any of the other warnings, that he could die. In Kentucky we are raising the age limit to sixteen and a half before they can get their drivers license. It came too late for Tyler. My grandson Clay, who is to be sixteen in July rails against the new upcoming ruling. It was my hope that he would see and understand why adults are so reluctant to let kids drive, and that the end result can be serious injury or death. After being at the funeral home, we went to the mall where they were selling T-shirts depicting the face of Tyler. We took them to the mall to purchase one for each of them. I am including their pictures with this article.

After all this, going to the funeral, and discussing youth, inexperience, and outcomes, a couple of days went by, and Clay asked me if I had ever had my car up over 100. I said no, not that I can remember (I didn’t tell him that I ran my dad’s Buick up to 100mph with a full carload of my girlfriends). He said, “I can’t wait to drive. I can’t wait to go 100.” So, you see, you can’t put an old head on young shoulders. The best I, or any of us can do, is to say to them when they walk out the door…be careful.