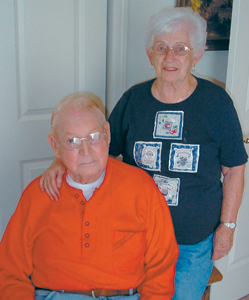 Leo Murphy was born on Lake Avenue on August 25, 1921 across from the old Catholic cemetery. His grandfather had owned much of that area in earlier years, and his Great Grandfather had emigrated here from Hamburg Germany. Germany was a place Leo would visit during the war but it would not be a sight seeing tour.

While attending sixth grade at Hobson School (State & Hobson) he met Betty Morr. Their childhood friendship would grow into a life-long partnership, producing a son, David and a daughter, Marcia, 11 grandchildren and 10 great grandchildren.

Leo attended North Side High School his freshman and sophomore years and then moved to Mason, Michigan for his Junior and senior years. Leo said, “After graduation I could not find work in Mason, so I hitch-hiked back to Fort Wayne and looked for work.” Late in 1939 he enlisted in the army.

He traveled to Biloxi Mississippi for basic training and to build an airfield. Later he was sent to Camp Lee, Petersburg, Virginia where he achieved the rank of Sergeant and was placed in charge of the stockade. Throughout his training he and Betty corresponded back and forth and in 1943 they made plans to be married. Betty did all the planning. They were to be wed at the Crescent Avenue Church of the Brethren. Invitations were mailed and all the necessary items were prepared for a nice formal church wedding.

Then Leo received orders to go overseas. He begged Betty to meet him in Virginia so they could be married. She canceled plans and a much simpler ceremony was preformed on July 17, 1943. Leo said, “I remember going out to dinner on our wedding night. We ordered watermelon for desert. That was our honeymoon.”

From Florida, Leo traveled to New York where he boarded the newly refurbished Queen Mary. It had been hastily converted to a troop transport and it carried Leo and the 9th infantry Division across the Atlantic to Glasgow Scotland. From there he traveled by train to Birmingham England where they all got a pep talk from General Dwight D. Eisenhower.

Leo drove Dodge gasoline tankers to the front lines to re-supply the infantry as it plowed its way through France. At that time he was in the 9th Div. 47 Infantry, Charlie Company, on loan to the motor pool. He added, “We would drive gasoline tankers and be surrounded by armored jeeps and then we would rotate back to the rear and spend time building baseball diamonds, or whatever needed to be done. Then it would be back to the front for more combat.

After the liberation of France, they headed for Germany and fought their way to the Remagan Bridges. As the Germans retreated they would blow their own bridges to slow the American army’s progress. Leo recalled an incident where the German artillery destroyed a railroad bridge and a train-full of their own SS Air Force officers were left stranded on the American side. Leo’s outfit took 300 prisoners and his previous stockade experience came in handy. It was at this time that he collected some German memorabilia
Leo sat on the couch in his home and recounted the stories of his past. His ruddy complexion revealed the years gone by and his facial expressions helped described the events of so many years ago. He said, “George Bush went into Iraq expecting to find weapons of mass destruction and he found none. George Patton went into the Ural mountains and found the biggest guns he had ever seen.”

The 9th started bringing in artillery. They stacked their ammunition like cordwood and then they waited. When a telltale puff of smoke identified the location of the big guns they threw everything they had at them. The destruction was total and complete, and the big guns were silenced.

The famous war correspondent Ernie Pyle had this to say about Leo’s division. “The Ninth was good. In the Cherbourg campaign, it performed like a beautiful machine. Its previous battle experience paid off. Not only in individual fighting but in the way the whole organization clicked…The Ninth did something in that campaign that we hadn’t always done in the past. It kept tenaciously on the enemy’s neck. When the Germans would withdraw a little the Ninth was right on top of them

Leo not only saw the horrors of battle he saw the horrors of the concentrations camps. At the Dauchau Camp he saw the greased gurneys that were used to slide Jewish corpses into the fire. At the Nordhaussen camp they were still digging trenches to bury the proof of their crimes when Leo’s unit arrived. He said, “I saw Himler’s lamp shop, a place where Himler used human remains to build lamps.

Leo left the army in 1947 but later re-upped for a year at Camp Lee in Petersburg, Virginia. He finally settled into civilian life with Betty and drove for Coca-cola, Eskay Dairy, Zollner Piston and then retired out of Essex Corporation. Although he and Betty now live in Ossian they still consider Waynedale their home.