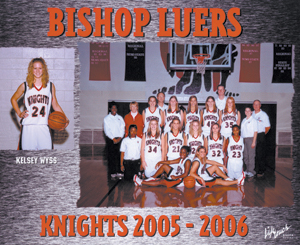 This was the year that their rivals waited for. Stefanie Gerardot and all her strong senior classmates would be off to college. So any SAC rivals, perhaps tired of Bishop Luers Girls Basketball never-ending success, pointed to this year. Payback time! But the Bishop Luers girls program does not rebuild. They Re-load! Embarking on perhaps the toughest schedule in the state (including 6 current and past IHSAA champs), the young Knights looked to their youth.

To date they have fashioned a remarkable 13-4 record. In the recent SAC tournament at the Coliseum, the unheralded 5th seeded ‘Kiddie-core’ Knights ran the tables for their 3rd straight Holiday Tourney championship…with almost all new faces. They started 3 sophomores and 2 freshmen! Lone 2005 starter, Sophomore Markee Martin is their top player. Plus Senior Vinnie Dawson and sophomore Amanda Pedro have improved dramatically. Vinnie was named “21 Alive” Player of the Week.

But who are these 3 freshmen that play key roles in this years reloading? Well, they’re no surprise to junior high AAU Coach Tom O’Brien, who has coached them for 2 to 3 years. “Megan Pedro is a fantastic defensive guard,” Tom O’Brien claims. “She’s 6 feet tall and can pressure the area’s best guards much like Amy Parrett, Emily Zoch and Emily Loomis did for Luers in the past. She’s lightning quick with long arms and a great vertical leap! Mary Hathaway is a solid steady performer who is so versatile that she can play post one quarter, and guard the next. She is a super 3-point shooter with incredible range!

But who is this Kelsey Wyss out of St. Joe Hessen Cassel? She seemed to come out of nowhere! “Yeah,” O’Brien agreed. “I knew she’d be the surprise that other teams wouldn’t even know about. Yes, she was a pretty good player early in her 7th grade AAU year. But in the actual AAU tournament itself in March, she started doing things in games that I’d never seen anybody do at that age, besides Stefanie. Things that nobody had even taught her. I knew right then and there that this lightning quick kid was really something special! Plus, she is super competitive…much like former Luers standouts Rachel King, Jennie Moppert, and Beth Nix. Kelsey absolutely HATES to lose!” The next year, she and Kristy Gerardot led her 8th grade team to the CYO championship. Then she led Luers’ AAU team to the championship in the prestigious D-1 team camp tournament at Spiece Fieldhouse last summer. Kelsey is probably Bishop Luers’ best shooter. In fact, she is leading the entire SAC conference in free throw percentage at 87%. Wyss is also one of the Knights best ball handlers and passers, too.

And now, she is becoming a solid defensive player, under Head Coach Teri Rosinski’s tutelage. In the Leo game, Kelsey led all scorers with 21 points. Even more impressive, she had 10 steals for a ‘double-double’. “Four of those steals were in the span of 1 1⁄2 minutes! I know the school doesn’t keep stats like that, but that feat has to be a record!” O’Brien exclaimed.