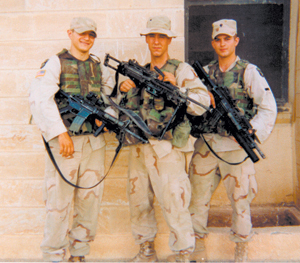 Waynedale businessmen and local homeowners waved their American flag in condolence as they lined Lower Huntington Road during the funeral procession from the Waynedale Baptist Church. The procession continued west down Lower Huntington Road and turned north on Ardmore Avenue. It passed Elmhurst High School, where Jonathan Blair had graduated just a few short years ago. A throng of students surrounded a newly planted Colorado blue spruce in the lawn in front of the school. It had been decorated with yellow ribbons purchased by students and local residents in memory of Jonathan. It seemed like such a small thing to do for such a huge sacrifice. Jonathon Blair, 21, died November 19, 2005, in Bayji, Iraq, 155 miles north of Baghdad, during combat operations. He was a member of Co. B, assigned to the 1st Battalion Regiment, 187th Infantry, 3rd Brigade Combat Team, 101st Airborne Division, Fort Campbell, Kentucky.
Born and raised in Fort Wayne, he was a senior at Elmhurst High School when the 9-11 tragedy occurred. At that point he determined he would join the armed services and do what he could to make this country a safer place. He enlisted in the Army after graduation and underwent extensive training with 101st Airborne Division. As a corporal this was his second tour of duty in Iraq.
Blair died Saturday with three other soldiers from his Army unit when an improvised explosive device detonated near their HMMWV during combat operations.
Army soldiers 1st Lt. Dennis W. Zilinski, 23, of Freehold, N.J.; Staff Sgt. Edward Karolasz, 25, of Powder Springs, N.J.; and Spc. Dominic J. Hinton, 24, of Jacksonville, Texas, were also killed in the attack supporting Operation Iraqi Freedom.
Jonathan has been awarded the Bronze Star, Purple Heart, Army Commendation Medal, Good Conduct Medal, National Defense Service Medal, Iraqi Campaign Medal, Global War on Terrorism Expeditionary Medal, Global War on Terrorism Service Medal and Army Service Ribbon, but most of all he has been awarded all the “Honor and Love” his family possesses.
Hanson Aggregates, the stone quarry that is located adjacent to Elmhurst High School, donated the blue spruce that was planted on Thursday near the school grounds. Division Operations Manager Bruce Rowley said, “We wanted to do something. When the school called we were more than happy to donate the tree in memory of Jonathon and the sacrifice he made for his community and his country.”
The funeral procession continued down Ardmore to Covington Road and on to Lindenwood Cemetery. In lieu of flowers the family requested that donations be sent to the Elmhurst High School History Department. Jonathon had a thirst for history and government and was an extraordinary student.