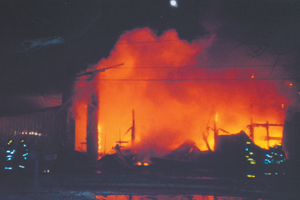 It was 8:45pm, Wednesday night, January 26, 2005 when I saw the lights in my rearview mirror and heard the sirens coming up behind me. I pulled over and let a number of fire engines and rescue units go by. When the road cleared, I decided to drive into Waynedale and see what all the fuss was about. I turned west on Lower Huntington off of Bluffton Road and saw a huge fireball blazing 60 feet into the cold night air. Smoke and fire was coming from somewhere north on Ideal Avenue. There were an abundance of fire engines and rescue units blocking the road. I cut down Beaty Avenue and stopped to take some pictures.

The clear, winter sky was aglow with flames shooting up towards the moon. There was thick black smoke laced with millions of flaming embers that were floating in an easterly direction due to the light breeze.

I snapped a couple of pictures and then drove west on Lower Huntington to Baer Road to get a better look. There is a deep ditch that runs parallel to Baer Road that was separating the many on-lookers from the fire. I found an old log that was spanning the ditch and crossed to get a better look. The building was completely engulfed in flames and every few minutes you could hear an explosion. I suspected the tires on the trucks were exploding. It was that or maybe propane tanks, but the explosions were making me nervous and I wasn’t near as close as the firemen. The Fort Wayne firefighters were dumping a lot of water on the fire and by 9:30pm they had knocked the huge fireball down to something less dangerous.

I drove home and came back Thursday morning. The cold weather continued to be a problem as it had frozen the water into a mass of icicles coating the skeleton of the old building that used to be the Waynedale Lumber warehouse. The building was located at 6801 Ideal and it looked to be a total loss. There was still smoke coming from a few piles of rubble and you could see the burned out shell of a couple of trucks.

I called Jim Gerke, Friday morning, and asked how he was doing. Gerke Plumbing is one of the three businesses that were consumed by the fire. He explained that he had lost all his equipment but was staying open with the help of other plumbing contractors. Jim has been in the plumbing business for 35 years. He was at American Legion #241 enjoying the ‘Thursday night chicken wing special’ when he heard about the fire. He got there before his business was totally consumed but the intensity of the fire caused the walls to collapse in on his equipment. Jim was insured but he wasn’t sure for how much. His early estimate of loss was about $10,000. He speculated that maybe an electric space heater failed or maybe one of the crankcase oil heaters for the diesel truck engines started the blaze. He didn’t have any evidence at this time. The ice-coated rubble was making it difficult for the fire investigators.

Later Friday morning I talked to Mike Oetting. Mike owns the building that was consumed by the fire. He runs his business, Summit Sweeping Service, out of the building. He leases the front part of his building to Triple S Tires. He said, “The fire started somewhere near the front of the building where Triple S is located. There was some initial speculation that maybe a dip-stick heater had caused the fire, but now they think it may have been an electric space heater.”

Summit Sweeping Services is an industrial cleaning service that takes care of cleaning places like Glenbrook Mall, Lowe’s and Jefferson Point. Mike said, “Two of my guys were on the way to work Thursday night when the fire tripped the alarm system. I picked up the alarm on my cell and called on them to check it out. When they arrived at the business, it was in flames. They managed to pull two of my trucks to safety, then they and the firemen pushed another truck out and another group of firemen saved a fourth truck. I lost one night of work, but we were back in business the next morning.”

“Ed Romary, Romary Associates let me use one of his buildings to start rebuilding. There were no contracts and no deals struck, just one man helping another.”

Mike said his business was insured and the total loss may be over $350,000. His personal loss after insurance may be over $100,000. “We had made some upgrades to the building and the office that were not included in the insurance, but the loss would have been much greater if not for the efforts of his employees and the firemen.”

Triple S Tires is a company that does tire service on large equipment such as loaders, cement mixers and off-road vehicles. They lost two trucks as well as some inventory. They usually have a large inventory of tires and rims but a recent downturn in business had their inventory at a minimum.

I asked Mike if he was planning on rebuilding. He said, “It depends on how the numbers look. There are a lot of buildings vacant now and it may be more cost effective to relocate somewhere closer than to rebuild.”