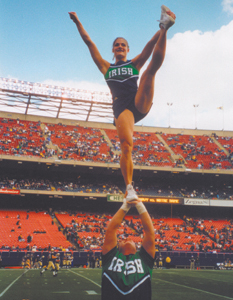 Heidi Schindler always knew she wanted to be a Notre Dame Cheerleader. Some of the earliest pictures of her show her in a Notre Dame cheerleading outfit. Heidi is the daughter of Jim and Fry Schindler-owner of Bandido’s Restaurant, who lives on Tillman Road. She was home from college over Christmas break and I had a chance to stop by her parents home and talk to her. We sat in the kitchen and talked about what it is like to be on the Notre Dame Gold Squad.

Heidi is bright and cheerful with a well-rounded maturity that you often find in a person that has traveled a lot. She seemed secure in the direction she is headed, which involves getting a CPA and beginning a career in accounting.

Some of you may have seen Heidi on the Regis and Kelly Show on October 4th. Regis was in South Bend doing an ‘On Location’ spot for his morning TV show and the Notre Dame cheerleaders were part of the entertainment. Heidi has met Dick Vital, Ari Parsigion, Joe Theisman and often has the opportunity to visit with other top celebrities.

Fulfilling her dream of being a Notre Dame cheerleader has not been easy. Heidi went to grade school at St. John the Baptist and then attended Bishop Luers, where she was on their cheer squad for four years. Her first major disappointment came when she was not accepted to Notre Dame. She applied and was accepted at St. Mary’s College as a math major, where she maintained a high GPA her freshman year. She then reapplied to transfer to Notre Dame.

She was accepted but after she arrived she was informed that they would not let her tryout for cheerleading because they didn’t allow first year students on the team. Heidi stayed vigilant, practicing her gymnastics twice a week and staying in shape. She kept knocking on the door until she was allowed a tryout at the end of her sophomore year. She was accepted to the reserve squad where she excelled in both gymnastics and stunting. Because of the transfer, and her change of major from math to accounting she lost some credits towards her degree. Next year, she will be a fifth year senior at Notre Dame.

She has risen to the most prestigious of cheerleaders, the Notre Dame Gold Squad. She now cheers at football and men’s basketball games.

I asked her if she had any favorite teachers from high school. She said, “You have so many different classes that it’s hard to get to know the high school teachers the way you remember your grade school teachers. But, Mr. Niemoeller is the one I remember the most. He was my Latin teacher, and I had him all four years at Luers. He was always there for me, supporting me while at St. Mary’s and Notre Dame and encouraging me when things weren’t always working out as I had hoped they would!””

I asked her about the recent coaching change on Notre Dames football team, and she said, “I really liked Ty (Tyrone Willingham), as did many of the football players, but they know they must move on. They are looking forward to learning a new system and starting a new year with new visions and goals.”

Heidi explained that there are six couples that lead the cheers. She has been with the same partner for two years and they are very familiar with each other as athletes. They have their own personal trainer and they practice every day but Sunday. She trains in the weight room as well as practicing all her stunts and routines. She enjoys performing at both basketball and football games, but feels that “in basketball you have a closer relationship with the crowd. In football you are more of a performer than a participant.”

Next year she will receive her monogram as a varsity athlete from Notre Dame, which means she will be eligible for more perks through the monogram program and there is a chance she may be captain of the squad.

I asked her if she would consider a career as a cheerleader with the Colts, or another NFL team, or maybe pursue a career in modeling. She said she wouldn’t rule anything out, but that she was really more interested in beginning her career in accounting and seeing where that leads her.

Heidi has two brothers and four sisters, all in Fort Wayne. Her brother Jimmie is also a senior at Notre Dame. Heidi went back to school January 10 to continue what is one of the busiest schedules you can have, taking fifteen hours of classes and performing as a college athlete. When asked what advice she would give to other young people, she said, “Never give up.