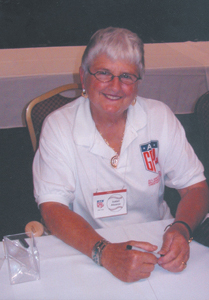 Pursuing the American Dream is difficult for some, especially a young female baseball player from Cuba.

Isabel Alvarez was born October 31, 1933 in Havana. Rafael DeLeon had built a ballpark and Isabel joined the Estrellas Cubanas (Cuban Stars) at probably twelve years old. The girl ball players were very poor and DeLeon provided food and bought Isabel her first glove. She still remembers going to his estate on weekends.

Isabel’s mother was very insistent that she play ball, as her mother thought that baseball was a way for Isabel to live a better life in the United States of America.

DeLeon also had a plan, as he once stated, “Isabel, you’re going to be the next girl to go to the United States, but we have to wait until you are fifteen.”

She made it to the United States in 1949 because DeLeon decided it was wiser to send a group of young players rather than just one. Improvising, the All American Girls Professional Baseball League (AAGBL) formed two traveling teams who wore the uniforms of the defunct Springfield Sallies and the Chicago Collens. Those two teams folded and players were either let go or moved up.

In 1951 Alvarez went to the Fort Wayne Daisies. She got traded a lot and over a period of three years played for Battle Creek, Kalamazoo, and Grand Rapids. She came back to Fort Wayne after the 1954 season, working at Fort Wayne Tailoring and Hall’s Original Drive-Inn on Bluffton Road. She told the interesting story that, because her English wasn’t so good, she was assigned to the back area as a carhop. There were three areas: frontcourt, side court and back court. The backcourt served mostly kids and in that area the tips were not very good.

In 1959 she received her citizenship papers. Her friends took her to English classes and helped her study for the privilege of citizenship.

Employment opened up for “Lefty” after she received her papers and she went to work at GE in the transformer department in 1962. She retired from GE in 1999 after 37 years of service.

In 1979 she went back home to see how much better off she had become. At that time her mother had given her a scrapbook. But it was lost when her luggage couldn’t be found on her return trip to the US.

After retiring Isabel has been very active in Waynedale civic groups, especially the Waynedale Lions Club and as Vice President of the Sandpoint Neighborhood Association.

Not being able to speak English, she was many times by herself. When people would ask the other players about her they would say “I don’t know her too well.”

Things are different for modern day players, as the Baseball Chapel Program holds services every Sunday in all professional ballparks for players and umpires, in both English and Spanish.

The interview with Isabel “Lefty” Alvarez was very enjoyable. She is one astonishing lady.

THAT’S THE WAY I SAW IT.