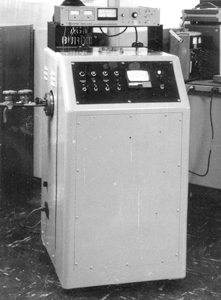 This week’s segment of Farnsworth’s fusion story is continued from a recent taped interview with Steve Blaising.

WN: In the last issue of The Waynedale News you mentioned, “We had men standing ready, especially at the “dive valve.” Could you please explain to us what the dive valve was and what it did?

Steve: The vacuum pump cabinet had three valves, one for the roughing pump, one for the finished pump, and the dive valve. In the event of an emergency the dive valve was opened to “dive” the vacuum back to normal atmosphere and stop whatever reaction was going on inside the tube.

WN: The side bar picture included with this segment, shows two valves on the left outside of the vacuum cabinet, which is the dive valve?

Steve: Neither one, those two valves are for the roughing and finished vacuum pumps, and we can’t see the dive valve because it’s inside the cabinet, but we need to back up our story.

At least a year before the cave, or pit lab on Pontiac Street, Dr. Farnsworth hired Gene A. Meeks to assist him at his home lab. Phil and Gene converted the upstairs of the Farnsworth home on the Southwest corner of State and St. Joe Blvd, to a functional tube lab by cutting holes through the floors from basement to ceiling and then cramming the upstairs with vacuum pumps, bake out ovens, welding gases, water and gas lines, lathe, drill press, spot welder and God knows what else? Phil and Gene had already created the first crude anodyne version of the fusion tube before ITT agreed to fund the project, and then it was moved to a small storage area at ITT on Pontiac Street that shared space with radio station WGL’s back-up transmitter. Eventually Farnsworth’s Lab was moved to a larger facility on the first floor east wing of ITT and that became Fort Wayne’s “Area 51.” We purchased additional power supplies and test equipment and besides power supplies, my job was to develop a means and standard for counting the neutrons produced by the fusion device. The staff was increased when George Bain (MS) Senior ITT Engineer and Fred Haak ITT Vacuum Specialist were added to our staff. After George joined the team, Phil’s Mechanical Engineer Jack Fisher, became George’s Technical Assistant and sometimes Jack didn’t like George’s ideas. Any engineer who’s worked for a large corporation knows how frustrating it can be when a supervisor brings a “bad idea,” to them and wants it built, and if tact and diplomacy aren’t applied in large amounts, it can end in a reprimand for insubordination. Once, upon a time I got reprimanded for telling a supervisor (in words he resented), his idea wouldn’t work, and because of that incident I couldn’t officially be transferred to the Farnsworth Lab, even on a part time basis, until the reprimand was removed from my personnel record.

One of the items we needed to build at our new location was a device capable of accurately sliding the fusor from side to side. George made a drawing for the slider device, but Jack said, “It won’t work!” George told Jack, “You would do well to do as instructed, and not question my design!” Jack and I later looked at the slider drawing and besides being underpowered, George had diagramed a limit switch backwards that would cause a failure if it was tripped.