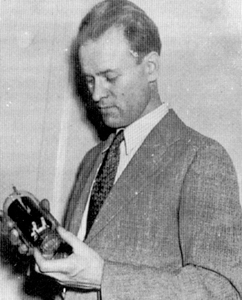 The history and time line for this Farnsworth story was taken from a book written by Mrs. Elma G. (Pem) Farnsworth, titled “Distant Vision.” Pem is the one Philo twirled around each time they celebrated a new idea or patent, and she also made many of his original drawings. That adds up to a lot of twirls, and drawing because the United States Patent office issued Philo T. Farnsworth at least 116 patents between 8/20/30, and 6/04/68 and the search for his lost patents is pending. After Philo’s medical retirement from ITT-Farnsworth, other patents were issued with “no name,” during the time between his patent application and issue dates, and he was still inventing after his retirement. Philo in evaluating his patents felt that his last two patents for electronic fusion were of more value than all of his other patents combined, unfortunately, he did not live to complete his work.

Donald G. Godfrey in his book titled Philo T. Farnsworth, The Father of Television said on page 187, that Philo disagreed with the idea that television was his most important work; he placed electronic fusion as his most significant contribution to science.

The on-going part (still interviewing people) of Philo’s fusion story was difficult to write because several of the original fusion team members are now deceased, medically unable, or unwilling to be interviewed. Whether or not a “sustained fusion” was ever achieved is perhaps one of the greatest mysteries of the last century. However, it matters not because the “historical event,” was that fusion had been achieved electronically! Before we begin the fusion phase of this story, I’d like to thank Delbert Lindley for inviting me to the ITT Farnsworth old-timers banquet at the Hoagland Hayloft on 10-05-03. Delbert worked in Farnsworth’s tube lab, but he knew little about the fusion project, however, he did know a few living members of the original team who might be willing to be interviewed? At the banquet I was introduced to Irene and Fred Haak, retired ITT engineer Steve Blaising, and Dr. Stephen F. Hofer current curator of Auburn Indiana’s Philo T. Farnsworth Television History Center at the new Kruse Veterans Museum.

Irene Haak worked as an engineer for Farnsworth beginning in 1946, and later for ITT until her retirement. Irene built Philo’s demonstration models, including the ones now on display at the Smithsonian Institute, but she knew little about the fusion project. Fred Haak was in charge of evacuating the fusion tube, and he was also one of three eyewitnesses interviewed who saw nuclear fusion happen in the Pit Lab. Fred was present when the neutron counters were pegged, and all the room and personal radiation badges were “exposed”. During my conversations with Fred and Irene, they said others besides Philo had passed away. Admiral Fredrick R. Furth, and Jack Fisher (mechanical engineer) are deceased too, and although George Baines is alive, he recently suffered a stroke, and is not available for comment. Robert Hirsch was the nuclear physicist on the project, but he’s now retired from the AEC, public sight, and was not available for comment. Gene Meeks was another key player, but during our phone conversation, when I asked him about the fusion project he said, “No Comment!” After several phone conversations, and taped interviews with retired ITT Engineer Steve Blaising I discovered that he joined the fusion project in 1959, and he was the last man to turn out the lights and lock the door on the Pit Lab, and that he still has records and pictures.