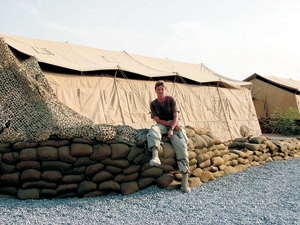 THE SPIRIT OF OUR MILITARY

Linda joined the USAF in 1973 towards the end of the Viet Nam conflict during a time in the history of the United States when joining the military was certainly not a popular thing to do. The late 1960’s through the mid 1970’s were generally considered to be dark years for United States military personnel because of the unpopular conflict in Viet Nam. ‑The wave of patriotism that is so intense and evident today was nowhere to be found during those years.

After serving two years in the USAF, Linda took a two-year break from the military when her first child was born. ‑Linda subsequently joined the Indiana Air National Guard in 1977 and still serves her country today. Her job titles have included Ground Radio Operator, Law Enforcement, Recruiter, Disaster Preparedness, and currently, Base Services Superintendent. Linda is also on the Allen County Emergency Planning Committee.

Over and above Linda is dedicated to our country’s freedom. She has served in the following conflicts: Vietnam, Desert Storm, Noble Eagle, and recently, Enduring Freedom. Linda has received literally dozens and dozens of military awards, service ribbons, and medals. She is the only Indiana Air National Guard member to receive the Air National Guard meritorious ribbon from two states, Indiana and Pennsylvania (for services to the state of Pennsylvania while being assigned to the Indiana Air Guard).

Linda has proven that she is a go-getter and an achiever. If you are ever around Linda, you better be ready to do something, as she believes in the philosophy of: “DO SOMETHING; LEAD, FOLLOW OR GET OUT OF THE WAY”. ‑Working full time plus owning her own DJ / Karaoke business (LB Music with Attitude), her spare time is limited, however, she still finds time for hobbies which include fishing, watching NASCAR and taking care of her husband, Tom.

Linda is the spirit of our American military. Like Senior Master Sergeant Becker we must remain committed to our country, and to supporting the men and women of our armed forces who go in harm’s way. Thank God for Linda and for all those that serve America with honor, courage and commitment.

The USS Indianapolis CA35 was sunk on July 30, 1945, but the survivors were not rescued until August 2nd—five days later. Mr. Don Beatty was on board that ship. We have the honor this year of having Mr. Beatty as Parade Marshall for Waynedale’s Memorial Day Parade on Monday, May 26th at 9am.

Don graduated from Central High School, Fort Wayne on June14th and entered the Navy on July 5th. He was a Seaman 1st Class striking for Fire Controllman (operator of gun sites). “We had just left port after delivering a big brown box that turned out to be the atomic bomb that helped to end World War II. The ship, the USS Indianapolis, that I was on board, was hit starboard side by 2 Japanese torpedoes.” Don said he heard 2 shots. He thought that the boiler blew up, or maybe, they got hit. He went outside his cabin to look. Just as he left, the doorway behind him was blocked with empty ammunition cans. The ship was listing. It didn’t take but a few minutes and water was up to his knees. “The ship went down fast because nothing was “dogged -in,” said Don. He said he swam as fast as he could away from the ship. It took less than 15 minutes for the USS Indianapolis to sink. About 1,196 sailors were on board, 900 survived the torpedoes, but when rescuers finally reached the shark-infested Pacific 5 days later, only 317 men were still alive.

Their ship was never missed. “Can you believe no one knew where we were,” Don repeated several times. Stranded in ocean water they were left afloat without fresh water and very little food. Many of the sailors were burned and badly injured. Many died. It was cold at night, and then, would reach 100 degrees during the day. They became victims of shark attacks, hallucinations, and dehydration. Finally on August 2, 1945 at 11:25am, five days after the USS Indianapolis went down, a pilot flying his PBY (seaplane) saw an oil slick while on a routine anti-submarine patrol. He found men spread across miles of open ocean. They called him their “angel”. His name was Wilbur Gwinn. Don Beatty recalls his rescue by the USS Bassett on August 3rd along with 152 sailors. “We were pulled out of the water by a metal basket, too weak to climb the rope. Some men were even too weak to climb into the basket. My first request was for a drink of water.” They had drifted over 120 miles from their sunken ship.

Waynedale is privileged to have this opportunity to offer our respect and gratitude to one of the survivors of the USS Indianapolis. Show your support and respect on Monday, May 26th – Memorial Day for this “true” American hero, Grand Marshall Don Beatty.