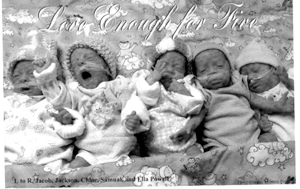 The Quints Are Home

I am sending you pictures of the quints born at Suburban Hospital, and a little update on how they are doing. You know, when the Dionne quints were born, it made world-wide news, and now with the assistance of fertility drugs, we are seeing more and more multiples.

The mother, Stephanie Powell, is known to me as a fellow nurse. She is also a friend of my daughter, Betsy. So it is especially personal to be a part of this multiple blessing.

I have had a lot of questions from my Waynedale Readers as to how the quints are doing and also when I might have a picture to share. So today is the day. All of the quints are home and doing well. Stephanie and Steve have plenty of help, and for that we are grateful.

Betsy accepted Quint Jackson from the doctor’s hands at the time of delivery, and you will see that she is holding her tiny one with pride. They have all done so well, it is amazing, since Stephanie is so tiny, herself. They were born Oct. 28, 2001. Stephanie says, “on our first trip to get my ultrasound, we saw five sacs and Steve about passed out.” They were immediately counseled on selective reduction, as I mentioned in a previous column, but the Powell’s declined. They placed the fate of the babies in God’s hands. None have any deficits of any type and are expected to grow and thrive as well as any singlet.

Stephanie only gained 40 pounds during pregnancy and at 22 weeks she entered the hospital to stay for 8 weeks. Jackson (Betsy’s baby) was the reason the babies were delivered when they were. The daily ultrasounds showed that Jackson had stopped growing. Stephanie took steroids for 3 days (enhancing lung development) and the babies were born on the 28th by C-Section.

One by one, as Jacob, Jackson, Chloe, Samuel, and Ella came home, Stephanie was asked how they would cope. A proud and smiling mom who believes in miracles says, ” I’m ready for the challenge.”

We are so excited that Betsy was part of this multiple birth miracle, and no less proud that she was a critical part of delivering Buddy’s puppies, all alive. For life is precious. To be part of God’s hand in the saving of lives is the greatest blessing of all. Thank a kind God for those who wish to save and preserve life. I am greatly blessed to have Betsy for my daughter.