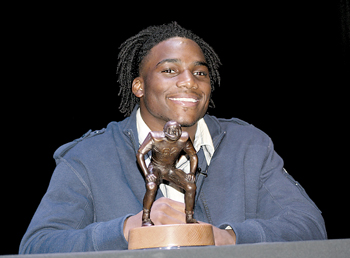 On December 3rd, Jaylon Smith got a call from the principal’s office. As he wandered through the halls to the office he thought, “I bet they want me to play basketball…Oh man, I want to play football.” “My game is football, nothing else!” As Jaylon entered the school office, Principal Keefer said, “Jaylon, I have a very important phone call for you.” Soon, Jaylon Smith was on the phone talking to legendary NFL Hall of Fame Linebacker Dick Butkus.

During the ceremony at Bishop Luers High School, Principal Keefer said, “Today we are honoring Jaylon Smith because he is a good person, he works hard in class and, does it all on the football field.”

Smith beat out a nation of senior high school football players. The winners were selected by a panel of 51 coaches, recruiters, scouts and journalists supervised by Hub Arkush of Pro Football Weekly.

“Already committed to Notre Dame, Smith has been a part of 4 state championship teams. He was a dominant two-way performer with the talent to follow in Te’O’s footsteps,” said Arkush.

“One was selected. It was you! What was your reaction when you heard?” Jaylon was asked.

“I heard of the award but never thought… My grandparents heard of Butkus!” said Jaylon, as the crowd at Luers roared with laughter.

During the event, the Butkus Foundation presented a film with highlights depicting the Hall of Fame-Linebacker as an unrelenting, dominating, maniac with great hands during his 8+ years as a professional player. As fellow players were interviewed in the film, they commented on Butkus, “He exuded a presence. So competitive. He wouldn’t just try to put you into the hospital…he wanted you in the cemetery!”

Butkus’ whole life is about football. 40 or so years ago he hung up his cleats. He told Smith and the audience, playing football is not the end. Prepare yourself along the way for after. Move on. And, that is what Butkus is doing today through the Butkus Foundation, encouraging teenage athletes to train hard, eat well and play with attitude, instead of resorting to performance-enhancing drugs.

During the Question and Answer session, Butkus said, “My I Play Clean Campaign is about ending steroid abuse in young athletes. It is a commitment to tackle the problem where 5 out of 6 students are using steroids.” He went on to say that steroids won’t make you tough and competitive. Steroids is cheating. What they will do is ruin your health. When coming off steroids-there is a big chance of suicide, he warned the athletes.

The Butkus Award has been presented for 28 years and honors linebackers at three levels of play-high school, college and pro.

As the Chicago Bears linebacker presented Jaylon the trophy he said, “One request. To not flinch from giving back. Set a good example. Convey your message through your actions.”

Butkus was at the Notre Dame campus earlier that morning presenting Manti Te’O the college level Butkus Award. Te’O led the nation’s top-ranked defense with 103 tackles, 7 interceptions and a fumble recovery. Te’O was the first High School Butkus winner in 2008. And could be a triple crowner.

The professional Butkus Award will be presented in January. All three award winners will be featured in a TV special which will air in late January.