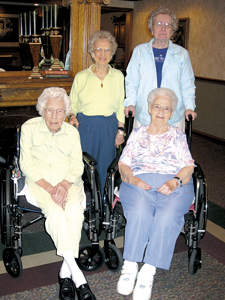 Last month to commemorate Teachers Appreciation Day, we featured the 12 teachers who call Kingston Residence home. We would be remiss if we didn’t also take the opportunity to honor our Nurses who live here too.

May was the official date to celebrate Nurses and also the anniversary of Florence Nightingale’s birthday. Four of our ladies chose to devote their lives to helping others and made nursing their profession. Donna Ross and Pat Meyer were Cadet Nurses. The Cadet Nurse Program was supervised by the United States Public Health Service to train nurses during World War II. After America entered the war, and as the war progressed, the demand for nurses increased dramatically, creating a nursing shortage. Hence, The Cadet Nurse Corps was created. Nursing students received accelerated training and their services were used even while they were still in training. Thus, a larger quantity of graduate nurses could be freed for military service overseas. The government subsidized the training for the students and offered funds to participating accredited nursing schools to encourage them to take part in the Cadet Nurse program.

Donna Ross took her Cadet Nurse training in 1945, at Methodist Hospital, now better known as Parkview. She went on to receive special pediatrics training at Riley Children’s Hospital then worked at Parkview for 20 years. She combined her love for children and her knowledge of diabetes to serve at a camp for kids who had diabetes. Donna feels that “nursing touched my life and changed it for good.”

Our other Cadet Nurse, Pat Meyer agrees that “nursing is hard work but is very rewarding.” She trained at St. Margaret’s Hospital in Hammond, Indiana along with 11 other students in her class from Huntington. Pat worked as a surgical nurse at Huntington Hospital, a floor nurse at St. Joe Hospital as well as an evening nurse at Lutheran Hospital. She remembers her height being a detriment at she tried to resuscitate patients. She had to jump up on the bed in order to be able to properly reach them.

Martha Snively spent the majority of her professional days serving Lutheran Hospital. She began training in 1956, worked in the recovery room and later become a nursing instructor there. When Martha moved to Pasadena, California, she worked at the Catholic Hospital. Martha felt her most challenging patients “were the elderly because they had numerous medical issues at the same time.”

Our final nurse resident, Nancy Clark, spent 20 years making house calls with the doctors. She remembers helping deliver babies and returning later to follow up on the new mother and baby. At one such delivery on Lafayette Street, the pregnant Mom announced, if this is another boy, you can just take him with you. Turns out, it was a boy, but the new mom kept him all the same. Nancy enjoyed seeing the children later in life that she helped deliver. Nancy was also a Supervisor of Nursing at the Allen County Board of Health.