SENATORS KEPT THEIR ‘EYES ON THE FUTURE’

State senators “kept their eyes on the future” during gamesmanship that could have pushed the 2011 Indiana General Assembly into overtime.

A five-week walkout by Democrats from the House of Representatives had many observers wondering if state lawmakers could meet constitutional requirements of passing a two-year state budget and new maps for legislative and congressional districts before the April 29 statutory deadline.

But senators “stayed in their seats during the House standoff and continued the people’s work,” conducting 33 committee hearings on 69 bills and six resolutions – including the state budget, charter schools, clean energies, economic development and local government nepotism.

Hoosiers deserve and expect this sort of teamwork from public servants. Throughout this session, 299 of 317 Third Reading roll call votes were bipartisan in nature. What’s more, 128 of these votes were unanimous – a noteworthy mark of the Senate’s commitment to fair and bipartisan problem solving.
Here are highlights of measures proposed and passed this session by the Indiana Senate:

Balanced Budget – At a time when other states are considering cuts to education and job-killing tax hikes, Indiana’s new two-year state budget avoids both. The $28 billion budget passed Friday is structurally balanced and would end the biennium with about $1 billion in reserves to help offset future economic downturns. It prioritizes K-12 education and increases statewide school funding both years of the biennium. The plan allocates $7 billion for public K-12 in 2012 and $7.1 billion in 2013, including monies to give performance pay increases for teachers and provide start-up funding for new public charter schools and expand full-day kindergarten. Overall university appropriations are more than $1.4 billion in both 2012 and 2013. Medicaid – a joint federal state program – would receive funding to help cover lost federal dollars and enrollment growth. State lawmakers were able to maintain current appropriations for the CHOICE program to provide in-home care for Indiana’s elderly and disabled and expanded newborn screenings for heart defects. Indiana State Police, the Department of Natural Resources and the Indiana Department of Environmental Management will all be funded at levels requested by the administration. As passed, the budget automatically returns dollars to taxpayers if reserves rise above 10 percent of appropriations in the future, while at the same time allocating a portion of excess reserves to pay down unfunded state public pension obligations.

Jobs – While government doesn’t really create jobs – aside from vital services like national security, public safety and education – several 2011 legislative measures may have the combined effect of being the most aggressive private-sector jobs package in state history. In an historic effort to make Indiana even more appealing and competitive among current and potential employers, lawmakers approved a reduction in the state’s relatively high corporate tax rate from 8.5 percent to 6.5 percent. Because energy is of major concern to employers looking to expand and relocate, legislators sent to the governor a bill encouraging the production of lower-cost, clean energies to meet the state’s expected demands for this and future generations. Similar to Gov. Mitch Daniels’ ‘Buy Indiana’ program of 2005, this year lawmakers passed a ‘Buy Local’ initiative, so local units of government will reinvest in the their communities by purchasing materials and supplies from area vendors. Realizing six in 10 new jobs over the past 15 years have been created by small businesses, especially new business start-ups, lawmakers supported adding a ‘Young Entrepreneurs Program’ to initiatives of the Indiana Economic Development Corp., complementing universities’ business curricula by matching potential first-time employers with interested communities and economic development groups. A proposal to help ensure Hoosier grain producers are at the forefront of foreign markets, senators unanimously voted for a new certification process to guarantee to world consumers that commercial feed manufacturers are following the latest industry standards. Supported by Indiana Farm Bureau, Indiana Pork Producers and Purdue University, the measure will not only help Indiana’s rural economies, but logistical hubs in cities across the state.

Education Reforms – This year’s ‘Putting Students First’ agenda positions Indiana as a national leader on education reform: allowing private universities to sponsor charter schools and increasing accountability for charters to ensure the highest quality options for Hoosier students and parents; creating Indiana’s first-ever school voucher program, so qualifying families may use a portion of their child’s per-student state allocation to pay tuition at participating non-governmental schools; requiring locally designed and administered performance evaluations of teachers and principals based in-part on student learning and academic growth; giving great teachers the opportunity to earn pay increases based on their effectiveness – not just seniority; ending the practice of laying off teachers with less seniority first, regardless of teaching abilities; and returning collective bargaining for teachers to its original intent – wages and wage-related benefits – giving school leaders the freedom and agility to run schools effectively and efficiently.

Even redistricting – the drawing of new state legislative and congressional districts – was more peaceful and productive than many had predicted. Senate Democrats joined Senate Republicans in a series of field hearings conducted across the state and had the opportunity for input on proposed district boundaries. In the end, both redistricting bills passed with bipartisan votes in the Senate. 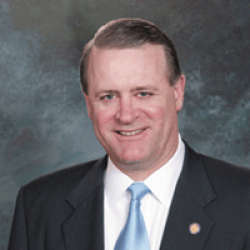 Latest posts by David Long - IN Dist. 16 Senator (see all)