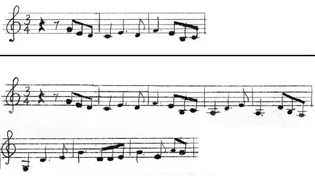 Heidi continued to study and become more proficient in the piano. Every now and then she would hit the special top key to see if it would do the same thing. It did more! There were extra notes added to what she heard before. So far there were ten notes sounding. Here is what Heidi heard…

As Heidi continued to improve, that one key played more notes and soon there were sounds of an orchestra playing with it but she couldn’t make out the melody. Pretty soon there were a lot of notes played and the orchestra was fuller. Now this is what Heidi heard when she struck a key…

Heidi was doing very well by now and was asked to play for church groups and in school. People were giving her compliments on her excellent playing. It seemed the better she played, the more notes and orchestra sounds the key would make. One day her mommy and daddy said they had tickets to a piano concert with the local orchestra. Heidi was so excited. She had never attended a piano concert. The evening came and everyone dressed in their finest attire. Heidi couldn’t wait to get there.

The pianist was a very famous American artist. His fingers seemed to just ripple across the keys. The music was beautiful and played with such feeling. Heidi was caught up in the soaring music and the skill of the artist. As she listened to one of the concertos, the melody sounded familiar. Yes, it was the melody she heard by playing the extra key on her piano! She quickly looked at the program and saw that it was from Tschaikowsky’s “Concerto 1, Op. 23 in B flat minor.” The only thing different was that the key didn’t play the whole melody. Heidi knew what to do. She understood that she must practice harder in order to hear the entire melody…

That’s exactly what she did. She really practiced harder. Her teacher was so surprised and complimented her on her skill and how much she had improved. Heidi wanted to play the concerto by Tschaikowsky she had heard at the concert. Shortly thereafter, there was an announcement in the paper for auditions for young artists to play with the symphony orchestra. Heidi thought, “This is my chance!”