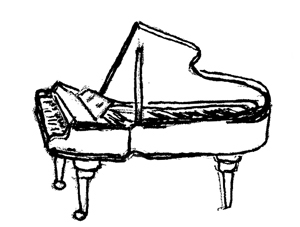 Part one of three

This story is about a girl named Heidi. She lived with her parents and three sisters in the hills of Pennsylvania. She sometimes wore her hair in pigtails and was always a bright and cheery gal. She loved lots of fun and enjoyed her family. She especially loved God and would sing songs that praised Him. That made her a very special gal.

Well, Heidi was very energetic and loved sports and dancing. She had taken swimming and dancing lessons. Several times her grandparents had come to see her and her sisters in dance recitals. She was so delightful and danced so very well.

The family had a keyboard that you could not only play but with a push of a button it electronically played all kinds of music all by itself. Heidi loved to turn up the volume and dance around the house. Sometimes she would pick out some notes on the keyboard. Her interest in the keyboard increased until one day she announced to her parents, “I want to play piano!” Two sisters were dancers, one was also studying the guitar and now she wanted to study piano. Her parents found a suitable teacher and Heidi started taking piano lessons all the while using the electronic keyboard.

One day her great grandfather called and said the two sisters of Heidi’s great grandmother had a piano they wanted to give her. Heidi was thrilled and couldn’t wait to have it. So, on her seventh birthday the entire family traveled to Cleveland to get the piano. When they returned with the piano, her daddy was able to gather some men to carry the piano up the hill to the back of the house and then to a special spot in the living room. Heidi watched with enthusiasm. A piano tuner was contacted. He said the piano needed to get used to the house temperature and that he would come in two weeks.

In the meantime Heidi continued to take lessons. One day the teacher asked Heidi, “Since you have a new piano, I want you to count all the white and black keys and tell me what you found out next week.” So Heidi counted the number of keys as least twice to make sure she was correct. After a double check, she came up with 89 keys. The next week she proudly announced, “My piano has 89 keys.” “That’s strange,” said Mrs. Caffas, her piano teacher. “Usually a piano has 88 keys. You must have counted wrong. Count them again, please.” Heidi did count them three times and it always came out 89 keys. Mrs. Caffas asked her again and she told her the count was 89. At this point Mrs. Caffas didn’t disagree. “She probably just double numbered along the way. It doesn’t make that much difference anyway,” she thought. Still she was curious as to why the difference.

One day while Heidi was practicing on her new piano, she hit the last key on top of the piano. Instead of hearing a note, she heard several notes. So she hit the key again and again several notes were played. It didn’t make any sense to her.  She told her mommy and they both listened but they, too, could not understand why it played more than one note. “It must be something this piano has built in,” her mommy said. So Heidi just took it for granted and didn’t say anymore about it, especially to Mrs. Caffas who would think she was crazy!