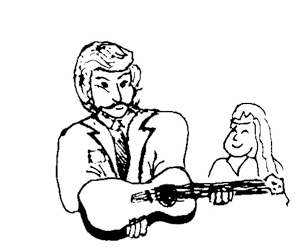 Our story began two weeks ago. A boy named Mario was born into an Italian family. His father was a famous violinist and wanted Mario to also study the violin. Mario, at five, did not want anything to do with the violin. He wanted to play the guitar!

Well, he studied and studied guitar and by fifteen he was playing in the concert halls. Later, he became a famous guitarist. He bought an expensive guitar made by a well-known guitar maker. He called his guitar, “Christopher.” He loved it like one would a child.

One evening after a concert, he went to his dressing room and put Christopher away. He was waiting on a friend to go out to dinner with him. He picked up the guitar case and as he did, the guitar slipped out of the case and out of the unzipped vest and landed right on the bridge. The guitar was smashed into a thousand pieces.

He couldn’t find a guitar repair shop that would try to fix it. So, sadly he gave it to a music storeowner who put it in a corner of his front window where it got dirty and dusty.

Far from the music store in another part of town, a little girl named Heather was living with her father who she loved very much. Her father, like Mario’s father, was a violinist and wanted his daughter to be one also. She instead, like Mario, didn’t like the violin and wanted to play the guitar. So her father bought her a cheap guitar. Well, little Heather did very well and progressed rapidly. She even asked to play at her elementary school. Unfortunately the instrument didn’t make a lovely sound. She needed a good one and they were expensive.

One cold December night, she and her father were hustling through the streets after her father’s concert when they passed a music store. Her eyes spotted a guitar propped in a corner all covered with dust. It was a mess with the front smashed in and the strings hanging loose. But there was something different about this guitar and little Heather wanted it.

“Daddy, look at the poor guitar in the corner. Could I buy it? I can see the price tag and it’s not very expensive.”
Her father leaned over and said. “Why do you want an old guitar that’s falling apart? You could never have it fixed.”

“But old master Giuseppe could fix it,” she said.

Giuseppe was a ninety-year-old master violinmaker from Italy who lived close to them. He had a small business repairing violins.

“But Giuseppe fixes violins and this is a guitar,” said her father.
With excitement in her voice, Heather said, “I know he could do it, Papa…please!

All Heather could think about, as they hustled home that cold night, was the old broken guitar in the music store window.