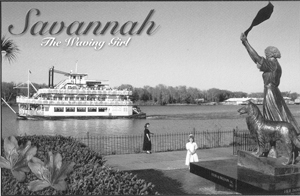 If you are a traveler and haven’t taken in Savannah, I recommend it highly. The city has restored many of its old buildings and it appears to me that the South, in general, takes better care of its historical buildings than the North does.

I have traveled in all fifty states and there are still a lot of places I haven’t visited. With all there is to see in this country, why would anyone want to travel abroad?

Savannah has much history dealing with both the Revolutionary and Civil Wars.

The Revolutionary War did not end at Yorktown in 1781as is often reported.

In May of 1782, General Anthony Wayne was sent with an army to defeat British Lieutenant Colonel Brown. The actual surrender took place July 11, 1782.

General Sherman’s name comes up many times when studying Savannah and the Civil War. The city was laid out by James Oglethorpe with homes located around squares. There are 24 squares today. One of the squares, the bank square, has a bank on every corner. Trustees were set up in the colonies and they were not permitted to own property or accept pay.

These 72 Trustees set up four prohibitions. 1, there was to be no rum, brandy or spirits in the colony. 2, There will be no lawyers. 3, There were to be no black slaves in Georgia. 4, There would be freedom of religion, except for Papists (Catholics). It was felt at that time that Catholics would be sympathetic to the Spanish in Florida, so they simply outlawed them.

The people of Savannah didn’t listen to the Trustees. In 1751 slavery was permitted and the part about lawyers, Catholics and rum was also ignored.

When the colony was set up by Oglethorpe he was very friendly with the Chief Tomochichi of the Yamacraw Tribe. Our history changed later in regards to Native Americans.

When you first go to the information Center, don’t ask about tours. The city of Savannah doesn’t want to be criticized about sponsoring any type of tours, even though there are several companies providing them.

The Information Center does give out information on museums, old buildings and monuments. One of the most interesting is ‘The Waving Girl’. This statue was dedicated to Florence Martus, sister of the lighthouse keeper, who for forty-four years waved to both incoming and outgoing ships. She died February 8, 1943 and was known worldwide by many sailors.

There is much you can learn while visiting Savannah. I made the trip June 6-11.

That’s The Way I Saw It.