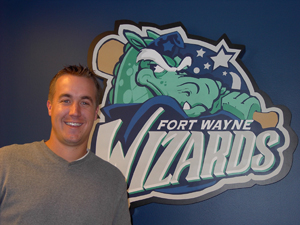 BUSY, BUSY AT THE WIZARD’S OFFICE

The Wizard’s baseball season is over. The employees can now take a rest and an extended vacation. That’s what you think! With the exception of Mike Nutter (General Manager) who got married, the other ten employees have shifted into high gear.

The Padres have renewed their working agreement until 2004 so that’s something the Wizards won’t have to worry about during the off-season. The Padres pay the ball players salaries only during the season. With an average of $900 to $1200 a month for players in the Midwest League a quick computation shows a payroll of over $100,000.

The Midwest League schedule was finalized during the middle of September. Now it’s looking over the schedule and planning the promotions. Some types of promotions are already known and the Winter Baseball Meeting in Nashville, Tennessee will have a Trade Show that gives teams a chance to learn about new ideas for promotions. John Knechtges, Director of Promotions and Corporate Relations, will have a hand on this.

All sorts of pass out literature with ads are now being developed. Mike Limmer will do most of the work on this.

The name of the game is ticket sales with Michael Donohoo, Randy Newell, Jared Parcel and Chris Watson involved with assistance from David Lorenz, Senior Assistant General Manager. Yes, the office is a family affair, as Lisa Lorenz is Office Manager.

Ticket sales are a little more difficult than it used to be because of ‘The Privacy Act’. Telephone contacts just can’t be made (they could be fined) so many types of mailings are utilized. They try to get people interested in purchasing tickets during a snowstorm but people think about baseball when sweat is dripping off their nose.

Retail sales are also performed. The Gift Shop is open during business hours especially during the holidays.

Greg Bobay and Coliseum employees are still working on the field but don’t put on the tarp when it rains. Some improvements and repairs need to be made at the ballpark during the off-season.

The middle of September until the first of March is a very busy time in the Wizard’s office. That’s The Way I Saw It.