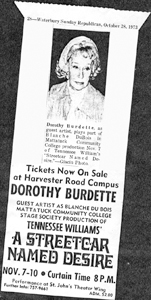 Many times you find a person living out their life in semi-seclusion that had very famous careers. Thus is Dorothy Burdette, a ballet dancer and actress. She is quick to supply the information that she was a ballet dancer not a ballerina. A ballerina is a very special dancer (international) with maybe only five that qualify. She with a smile admits that as an actress she lied about her age. If a director wanted a 24 year old she was that and if they wanted an 18 year old she was also that. She was so beautiful none knew her right age.

Dorothy was born in Charleston, West Virginia on 10-10-10. At an age of six she started taking ballet lessons. While still in her teens she earned a degree in English from Brenau College at Gainsville, Georgia. At this college she was both student and head of their dance department. On to New York and the real world of ballet with the New York Ballet Company.

She went into acting when she met a Brutush actress Enita Celles who was looking for an actress that could dance. It’s a known fact: once you give up your everyday training in ballet which requires five hours per day the director knows this after one day and the public knows after three days. After acting she owned a Ballet Dance School for 25 years. During this time she held free dance classes, numerous free programs as well as therapy sessions for the handicapped and drug addicts.

She talks about her acting career with a great deal of humor. One of her greatest rolls was Blanche DuBois in a Mattatuck Community College production of “A Streetcar Named Desire”. In the Cape Codder newspaper of Orleans, Massachusetts a critic once wrote: “I will submit to no one in my admiration of Jessica Tandy who took the part of Blanche in the original production but truth and candidness force me to admit that Dorothy Burdette is her superior in the part.” Before Streetcar Named Desire, Dorothy played the title role in “Alice in Wonderland” with the Ballet Russe which enjoyed successful national tours.

Then came radio soap operas such as “Just Plain Bill” and “Aunt Jenny”. She graduated into television and many times had rolls in NBC’s Series, “Doorway To Danger” and ABC’s “Date With Judy” and “Tales of Tomorrow”. At that time TV was live. She also played a part in “Rachel Rachel” the only movie directed by Paul Newman.

Question to Dorothy: “Do you have any animosity that you didn’t get better roles to play?” Her reply, “NO! I was working and having a wonderful time.” Many of her experiences are told in a very funny manner. You can tell she enjoyed her life.

Dorothy was also quick to state that she thought ballet is better now than back in her time. It has become a science in her words.

Burdette has moved to Fort Wayne from Johnson Valley, California as her daughter-in-law wanted her closer to her.

My interview with Dorothy was the most enjoyable I’ve had, because folks That’s The Way I Saw It.