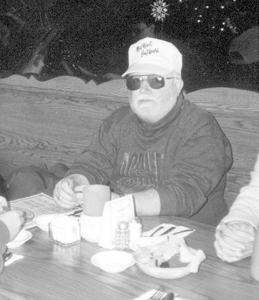 My cousin sent this to me by E-mail and I realized I am one of the people he has described. I think all my grandfathers, my dad, my uncles, and all my brothers are also. His description goes just a little beyond what the dictionary says. Maybe we should change the dictionary. What I’m referring to is the word ‘geezer’.

(From my cousin’s more detailed and descriptive letter)

Geezers are easy to spot. During the playing of the National Anthem at sporting events, they hold their caps over their hearts and sing without embarrassment. They know the words and believe in them. They remember World War I, the Depression, World War II, Pearl Harbor, Guadalcanal, Normandy and Hitler. They remember the Atomic Age, the Korean War, The Cold War, the Jet Age and the Moon Landing, not to mention Vietnam.

If you bump into a Geezer on the sidewalk, he’ll apologize. Pass a Geezer on the street, he’ll nod, and tip his cap to a lady. Geezers trust strangers and are courtly to women. They hold the door for the next person and when walking, they’ll make sure the lady is on the inside for protection.

Geezers will get embarrassed if someone curses in front of women and children. They don’t like violence and filth on TV nor in movies. Geezers have moral courage and they seldom brag unless it’s about their grandchildren in Little League or music recitals.

America needs Geezers with their decent values and common sense. We need them now more than ever. It’s the Geezers who know our great country is protected, not by politicians or police action, but by the young men and women in the military serving their country in foreign lands, just as they did.

After the recent 9-11-01 tragedy, I think we should salute our fire fighters and police officers as well. They all serve, protect, and put their lives on the line for us without a thought, except to do a good job the best they can and to try to come home safely to their loved ones. Yes, America needs Geezers. Y’all have a very happy New Year.