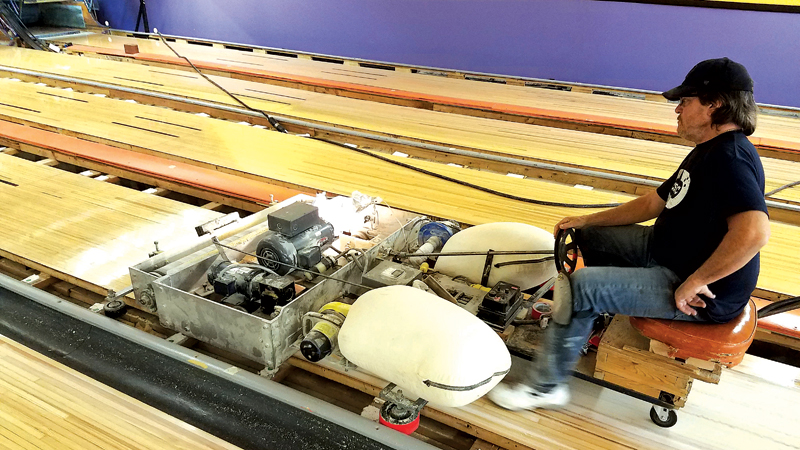 On a recent summer afternoon, workers bustled in and out of the Eagles Post #248, pushing in and shoving out yellow handcarts loaded down with shiny, new flooring.

But the brand new surfaces weren’t for the walkways of the post’s popular lounge. The Eagles are replacing their time-worn bowling lanes.

The Fraternal Order of Eagles (F.O.E.), located at 4940 Bluffton Road, are taking their current, 10-lane, wooden alleys, and refurbishing them with new, tougher synthetic Brunswick lanes, according to Marty Murphy, an Eagle’s Trustee who’s been with the group about three years.

The current 10 lanes, which are each 60 feet long and 42 inches wide, have worn down after years of repeated polishing, sanding and renovations. The present, worn-down alleys were brought over from the old Eagles post in the 2300 block of Broadway, when that post closed about the year 2000, Murphy said.
The new surfaces are basically just layer after layer of paper and glue. “It’s similar to laminate flooring,” Murphy said, “just thicker and a lot more expensive.”

In addition, Murphy commented, the new lanes are remarkably durable.

“This stuff, you could drop a 16-pound ball on it, and it wouldn’t leave a mark,” he said. “Heck, you could take it outside, throw it on the concrete and beat the Hell out of it, if you wanted – it’d look exactly the same!”

The old, wooden lanes had worn down so much, something had to be done soon. “This was a needed improvement for the club,” Murphy remarked. “If it didn’t happen this year, it was going to have to happen next year.”

The Eagles expect to spend about $65,000 installing the new lanes. But once the roughly five days of work, which he expected to be completed by about June 24, is finished, Murphy predicts the benefits will be many fold.

For one, bowling scores on the new surfaces are usually higher, according to Murphy. Younger bowlers also will benefit, as the renovation work will replace bowling bumpers on four of the alley’s lanes. The rubber guards pop up when kids are bowling to keep their balls out of the gutters.

The history of the Eagles is a long one. The group was founded in 1898, by six theater owners in Seattle, Washington, who had gathered in a local shipyard to talk about an area musicians’ strike.

After discussing the trouble, the men came to an agreement and formed what they called, “The Order of Good Things.” As the group grew, members chose the bald eagle as their official emblem and changed the name to the “Fraternal Order of Eagles.” The Women’s Auxiliary was founded about 29 years later.

Today, the non-profit group — whose mission is to have its posts “unite fraternally in the spirit of liberty, truth, justice, and equality” — comprises almost 800,000 members in more than 1,500 locations around the United States and Canada.

The F.O.E. donates more than $10 million a year to local communities, fundraisers, charities and more. As its own literature states, the group “gives back 100 percent of the monies it raises in the form of grants.”

At the Bluffton Road Eagles post, bowling is open to the public, although only members are allowed to purchase drinks at the bar. Games are $2, and shoe rental costs $1.

Murphy said the Eagles Bowling Center is important to Waynedale, because it represents something that anyone – but especially families – can do, and do together.

“It’s just good, old-fashioned family fun,” Murphy explained. “And anybody can bowl. I’ve seen kids as young as two years old out here with their families.

“If you can pick up a bowling ball, you can do it.”