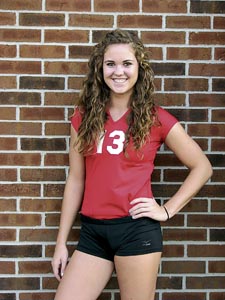 Taylor Gillie, her team’s big hitter this past year in Volleyball, recently made Bishop Luers Volleyball history! She became the first Luers player EVER to win the coveted (Tiffany Gooden) GLASS SPIKE AWARD given to the best Volleyball player in the entire SAC Conference! Considering such a rich Luers history full of great Volleyball stars in the past like Emily Loomis, Nicolle Howell, Jenny Eckrich, Rachel Sorg, Marissa Scheiber and Sara Eckrich-that’s quite a feat! (Angie Harris played in the early 90s before any such award was given.) Taylor told me she “was a little nervous, more like apprehensive” before her name was called at the recent SAC banquet highlighted by Player of the Year awards that were given out for both Volleyball and Football (Bishop Dwenger’s Remound Wright).

Taylor was excited when her name was called! “It’s a great honor!” she said. She proceeded to thank her wonderful close-knit family, her coaches and teammates.

Taylor remembered that basketball was actually her biggest love all the way through her Junior High years at St. Joe-St. Elizabeth School. She also remarked that she absolutely loved B Ball playing for Coaches Phil and Dave Schultheis in CYO ball, and for our 6th, 7th and 8th grade AAU developmental teams at Bishop Luers. In fact, at our season ending Spiece D-1 camp 13 game tournament in June of her 8th grade year Taylor Gillie and Anne Marie Shank were our 2 best players at its conclusion! By that time, Taylor was knocking down 15-foot jump shots and blocking shots like a human eraser! Her confidence was never higher.

Even though she still enjoyed basketball in her early years at Luers, she absolutely fell in love with volleyball. “By my sophmore year, I knew I wanted to play in College”, Taylor remarked. So she started playing in the Performance Plus summer league. She also played 6 weekends a year at Chi-Town in the Great Lakes Power League.

“There are some REALLY strong clubs in Chicago, and the competition is much higher than in Fort Wayne”, she explained.

Well soon Taylor will get to live out her dream! She has accepted a full ride to play VBall at Stoney Brook University, a D-1 school in Long Island, NY.

This talented 6-foot spiker clearly had her best year as a Senior. Taylor had 378 kills (most with powerful slams) and 106 blocks, both career highs.

Taylor credited her teammates, especially All-SAC setter Abby Bireley, from St. Therese School here in Waynedale. Taylor knows where her bread is buttered! She explained that it is so important to have a top-notch setter like Abby. Plus, Taylor remembered, “We met in 6th grade AAU Basketball. We’re like sisters! It’s really neat!” Abby agrees. “We got so that we really started to even know what each other was going to do ahead of time! I love setting. A setter is like the quarterback or the point guard for volleyball. And Taylor and I really connected well on the 1 quick set (low set). I’d put it up there quick and she’d always slam it down!” The 2 Co-Captains obviously really complemented each other on the court.

Taylor was named All-SAC 1st team in both her Junior and Senior seasons. This year she was also named All Diocese, All NE Indiana, and one of only 3 Volleyballers in Indiana to be named Academic All State. Taylor reached all of her goals except getting to play in the IHSAA state finals.

Taylor has alot to be proud of. She helped rebuild a Bishop Luers Volleyball program that had been struggling in postseason play since finishing 2nd in state back-to-back years way back in 2001 and 2002. In fact, no Luers team since then had even won a Sectional title until Taylor and Abby’s 2009 team broke through in exciting fashion! Then they repeated Sectional victories in besting Woodland in 2010.

Taylor recalled how tremendously exciting that 2009 title was. But she commented that, “This year was different. We expected to win this year because we knew we were better than Woodland. It was still neat, but we really wanted to go further. However, we had a total team effort in both years!” She’s right. Besides Bireley and Gillie, Ave Stout, Annie Shank and Laura Welling stepped up big for the Lady Knights both years. And in 2009, Senior Kristi Gerardot was huge for Luers.

Congratulations Taylor. You have etched your name into a rich history of Bishop Luers athletes from all sports! I myself have watched Taylor grow up from this pretty tall 6th grader into a powerful athletic spiker—-the best in the entire SAC! But best of all for me was seeing this good kid turn into a super nice young lady. Taylor Gillie will be a smashing success in whatever path she chooses in life!