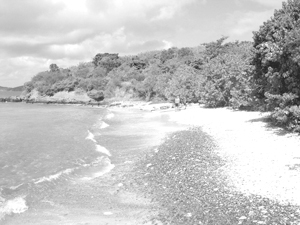 Lambini the hungry monk declared, “I’m hungry, where can we get breakfast?”

“You got any money,” asked Dave?

“No,” said the Monk. “I’ve lived in a monastery since I was a child and we never needed money.”

“Well you need it here if you want to eat,” said Dave. “That’s why I’m here. I didn’t come ashore just to visit you; I need money for breakfast. I came to pick fruit from that gnip tree next to Pop’s boat shack. I sell a bag of six for a buck to the tourists at the ferry dock. The ferry arrives in 30 minutes, so if you help me gather some we can sell them and then buy some breakfast for ourselves.”

“Well, try one then,” Dave said as he climbed the tree and started shaking gnips from their branches. Lambini picked one up and ate it, and then kept on going, eating one after another. He spit the seeds out nearly as fast as the fruit hit the ground.

“Hey, what are doing?” Dave yelled. “If you don’t stop eating them, we won’t have anything to sell!”

Once Lambini quit gobbling them down and started helping, he and Dave soon harvested several dozen bags of gnips, and then headed for the ferry dock. While they waited on the ferry, Dave instructed Lambini about how to sell gnips.

Dave said, “It’s good that you’re barefoot and impoverished, we can tell them we’re selling gnips to feed the orphans at your monastery; you know, play on their sympathies.”

“I can’t say that,” Lambini protested.

“Because it’s not true,” Lambini insisted.

“Truth has nothing to do with selling; I usually tell them gnips can cure seasickness, and several other ailments too. They snap them up faster than I can make change.”

“It ain’t dishonest if they really get their problems fixed.” Pop is always telling me, “The human mind has a latent power to heal, so if they really believe gnips will fix their ailments, they will.”

“Dave,” insisted Lambini, “it’s a spiritual axiom that our past actions prefigure present events. If we do something dishonest today, it will affect our spiritual condition tomorrow.”

“We’ll argue later,” Dave said. “The tourists are coming.” He went up to one of the men coming off the ferry, and shouted, “Hey mister, you look green around the gills. How about some gnips, they fix mal de mer, diarrhea, asthma, hay fever, and rheumatism. We have people on this island who swear that they cure cancer. Only fifty cents a piece or a bag of 6 for two-fifty, they’re the sweetest ones on the island, and absolutely fresh; we just picked them ourselves ten minutes ago.”

Dave said, “Give this man a bag, Lambini,” as he continued his sales pitch, “Step right up folks, don’t be shy, when these are gone there are no more until next year.”

“Hey where’s my change?” said the first customer, “I gave you a five dollar bill!”

“I don’t want another bag, I want my change!”

“Fugetabotit, go away, you bother me,” Dave snarled at him. “The nerve of that guy,” he said to Lambini. “Never give a sucker an even break, or wisen up a chump. With people like him, no good deed goes unpunished.”

Dave quickly sold all of the rest of the gnips, and then walked away, leaving Lambini and the unsatisfied customer standing on the dock.

Lambini quickly decided that he had better beat a hasty retreat himself, and scurried off after Dave, shouting, “Hey Dave, wait up.”

After eating a hearty breakfast, Dave asked Lambini, “How would you like to visit Lovango? We can fish the reefs on our way there and maybe catch enough fish for lunch and dinner too.”

“What’s on Lovango,” asked the monk?

“Not much,” quipped Dave, “Pop suggested that now that Santana is dead, you might want to move into his shack and look after his goat herd. The goats went wild after he died, but you know about goats and making cheese; maybe you could round them up and start making cheese for Santana’s old customers?

Meanwhile Barrack the rooster had ventured downtown and stolen a big spliff from one of the West Indians who was about to light it. The Indian gave chase but Barrack few up into a tree and ate the whole thing while his pursuer threw rocks at him and helplessly cursed him.

After his enemy gave up, Barrack got the “munchies,” came down from his perch, and went in search for something to eat. He strutted into a bar and helped himself to some free popcorn sitting on the bar, which is when the trouble began. Barrack’s old nemesis, the piano player’s monkey, saw him and gave chase. Barrack flew from the bar, raced down the street, and into a makeshift voodoo gathering place where the parishioners were helping Mama Mambo with a spirit transformation. The drums beat their hypnotic rhythms and Mama Mambo’s eyes suddenly fluttered and rolled back in her head.

On a table at the side of the room, people had piled offerings to the spirit to entice it into Mama Mambo’s body. Among those offerings was a large sheet cake, but after the monkey chased Barrack through it, the frosting had two sets of tracks in it, the monkey’s and Barrack’s. To be continued.