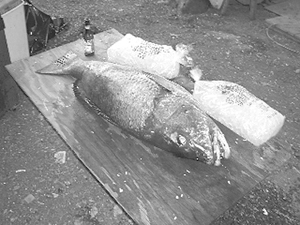 Dave (“Shark Boy” they called him) had just pulled a huge lobster over the dinghy’s rail when a familiar headsail appeared; that sail belonged to the Flying Circus. Dave’s Dad, the captain, was standing bare-chested at her helm with a sheet line in each hand.

“All Saints be preserved,” declared Lambini, the hungry monk, as Dave’s Dad approached them. Their rescue came not a second too soon for him:  even though he was sea-sick green, with his stomach still continually trying to upchuck from mal de mer, “Brother Lamb” (as everybody called him) felt like he was starving. It had been nearly two days since the monk had eaten anything.

“Ahoy,” said Dave, and his Dad nodded and smiled from ear to ear as he spun the big sloop into the wind and allowed his sails to luft. “Toss me your line and get aboard,” he shouted back.

He cleated their line on an aft-cleat and Dave scrambled aboard, dragging the lobster with him, but Lambini remained huddled in the dinghy, looking confused and scared. Dave’s Dad was about to re-fill his sails with wind when he noticed Lambini was not on deck.

“Get the lead out, lubber, or we’ll feed you to the sharks,” said the captain.

Dave patiently said, “When the next wave rises you up, grab the stern pulpit with both hands and put your foot on the toe rail.” It was a close call for Lambini, who almost tumbled back into the sea, but Dave grabbed him by the belt and hauled him over the railing by brute force.

“Good job, son,” said the captain, “you’re as handy as a pocket in a shoe. Where did you find that sorry excuse for a land-lubber?”

“He found me, Pop. A giant black shark dragged me and the dinghy all the way from behind Lovongo to Superstition Bay, where I saw Barrack running on the beach.

“Anyway,” Dave went on, “Brother Lamb was not far behind our rooster friend. When Barrack recognized me, he flew out to the dinghy. I was going to leave Lambini behind, but he begged for mercy.  He’s a long ways from home and he’s having a hard time learning the ropes down here.”

The captain turned to the starving monk and asked him, with curiosity, “What brings someone like you to these parts, Lambini?”

“Well sir,” the monk answered, “it’s a rather long story, and I could better tell it if I had something to eat. Please, do you have any food on this boat?”

“Son,” said the captain, “go below and get Brother Lamb something to eat, and there’s some bottled water in the ice chest. But whatever you do,” he went on ominously, “don’t give him Jessie’s special Mason jar.”

Everybody that hung around the captain’s boat shack knew not to mess with Big Jessie’s special Mason jars. Each of Jessie’s jars has but one peach in it and the rest is a colorless liquid that’s powerful enough to make a cadaver’s socks go up and down. It’s pure unadulterated corn liquor the likes of which no Yankee had ever laid lips on. Jessie’s moonshine was made from nothing but pure corn mash with no sugar added. Most folks who knew him suspected that corn liquor was the main reason Big Jessie made so many trips back and forth between the Caribbean and eastern Kentucky. The locals were proud of their rum, but Jessie said the kind of rum they drank came from fermented and distilled molasses, and was for pantywaists and sissies. He preferred the real deal, pure Kentucky moonshine.

While Lambini was greedily eating the sandwich Dave brought him, the captain announced, “Don’t eat too much. We’re having a cookout at the boat shack tonight, it’s a welcome home party for Jessie. Big Jessie and Dan went fishing last night and Dan caught an 80-pound Cubera snapper. Dave, we can cook your lobster with fresh coconut meat, tropical fruit and some of Ruth’s (st.johnspiceshop.com), special seasonings and we’ll have a fish boil too. Tonight we’ll feast in style!” To be continued…