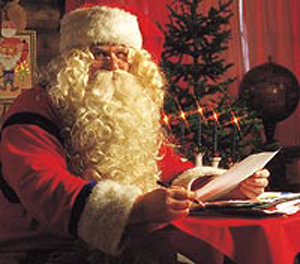 Santa Claus was quite the event as I grew up in our blue-collar neighborhood in Detroit, Michigan. My Dad had one of his construction co-worker pals come by the house dressed up as Santa, and he always had a few small trinkets or quarters for us. I don’t remember how old I was, but one day I realized that the guy wasn’t Santa Claus.

Some people kill the idea of Santa, telling their kids from the outset Santa is a lot of bull. I find this sad. Kids fantasize alot, and thinking there’s some jolly old fat guy with rosy cheeks that loves to give them toys is not a bad thing. For kids, fantasizing can be healthy. It helps them understand that dreams can come true.

I detest the fact that earlier this year in September, Meijer had the nerve to put out Christmas decorations in September. The commercialization of Christmas is appalling. What’s more shocking is that many families get through the entire Christmas season without once mentioning the word Christ.

Back in the early 80s I rented a Santa Claus suit on December 23rd from Stoners. I went to a small hardware store on Wells Street and bought about 200 small trinkets for 25-50 cents each. I spent the entire day visiting customers and handing out the trinkets and had quite a jolly time. At the end of the day as I was heading back home, (it was around 6:30 at night) I realized I still had around 100 of the toys left in my bag. As I passed the Santa display on the Fort Wayne National Bank building I saw maybe 20 or so cars with families looking up at the lights. There were plenty of kids in the parking lot, so I pulled in.

I went and stood under the Santa display with my red sack in hand, and naturally the kids started lining up and I started handing out cheap toys. It wasn’t long before I ran out of toys. By then, there were maybe 30 kids in line that didn’t get anything. So I told the kids and their parents, not to fear, I had another stash not far away and would return shortly. I hopped into my sleigh (a small off-purple Oldsmobile) and headed off to the Wells Street hardware store. I cleaned out their entire small toy section and spent maybe $200 in the process. I even cleaned out a rubber ball display and had to put those in the trunk and backseat.

I returned to the bank and the line was still there. Parents came up to me, and, heaped praise on the bank for providing this service to their kids. Of course, I told them the bank had nothing to do with it. They asked who did, and I said it was simply me, spreading good cheer. When they asked my name I said, “Kris Kringle” and went back to handing out toys to the kids. Soon the line was gone, as it was getting late. I found it amazing that the last kid in line got the last toy in my bag. It was one of those small little Army guys with a parachute.

As I turned to go to my car I saw a woman with three kids running across the street. Oh no, I thought, my bag’s empty. As she approached me, visibly out of breath, she explained that they had heard about what was going on from the store on Wells Street. She said they were not going to have a Christmas, that she didn’t have the money to provide one for her family. So there I was, empty bag in hand with a poor family that had just ran maybe a mile to see Santa.

I was at a loss as to what to do. I got down on one knee and I struggled to get through the Santa suit to my wallet. I pulled out four $20 dollar bills and handed one to each of them. I have no idea how they’d spend that money, I only hope it brightened their otherwise gloomy Christmas. They walked away into the darkness holding hands and crossed the street, while I walked away with tears running down my face to my car.

At one nursing home, which I think was in Bluffton, I actually had a few of them ask to sit on my lap. I had purchased gifts and wrapped them in blue and pink so I would know what to give a man or a woman. Some of them cried. After I left, I cried too.

My Santa gig went on and off over the years until the Christmas of 1995. That year I made the front page of both the New York Times and the Journal Gazette.