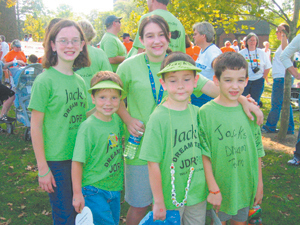 As a parent of a child with Type 1 diabetes, I’d like to take the time out and inform the public that November is National Diabetes Awareness Month. Diabetes in both forms – Type 1 and Type 2 – is the single most costly chronic disease today, and affects nearly 21 million Americans, with that number steadily increasing each year. You will find that the statistics on diabetes are not only staggering, they are also frightening.
Our son, Jack, is a carrier for The Waynedale News. He was diagnosed with Juvenile Diabetes at the age of seven, two years ago now. Jack delivers the papers on his bike in the Mariners Ridge/Pheasant Run/Winchester Ridge additions.

The Juvenile Diabetes Research Foundation (JDRF) founded in 1970 by the parents of children with Type 1 (often called juvenile) diabetes — an autoimmune disease that strikes children suddenly, making them insulin dependant for life, and carries the constant threat of devastating complications. Type 1 diabetes, the most severe form of the disease, needs constant attention, and managing it is a 24/7 job that requires daily multiple insulin infusions, a rigorous meal plan, and tight control of blood sugar levels. We are thankful that Jack is now on an insulin pump. Being a parent of a child with Type 1 diabetes usually means many sleepless nights, constantly checking my child’s blood sugar level while he’s asleep, in fear of seizures, and comas that can happen overnight. For those with Type-1 diabetes, life is a never-ending routine of finger sticks and insulin injections just to stay alive.

More than 1.5 million people are diagnosed with diabetes each year. What’s more, the increasing rate of obesity among young adults today only exacerbates the rising cases of Type 2 diabetes in the U.S. – the form of diabetes which is in direct correlation with one’s diet. In people with Type 2 diabetes, a person’s body still produces insulin but is unable to use it effectively.

In both forms of diabetes, merely taking insulin does not cure the disease. And the damage of complications caused by diabetes does not discriminate against either form. As the leading cause of kidney failure, adult blindness, and non-traumatic amputations, and a leading cause of nerve damage, stroke and heart attacks, it is no wonder why diabetes accounts for $132 billion in health care costs a year.

This November 14th marked the very first World Diabetes Day observed by the United Nations, an extremely important milestone in recognizing diabetes as a worldwide epidemic and elevating it to the same threat level as HIV/AIDS, tuberculosis and malaria. This recognition provides the perfect opportunity to raise awareness for diabetes and more importantly, provides a platform in which to further encourage Congress to support Type 1 diabetes research by renewing the Special Diabetes Program – a landmark program providing critically needed federal funding for Type 1 diabetes research. Unless the program is renewed this year, 35% of federal support for Type 1 diabetes research is as risk – possibly delaying or even halting the current progress of promising research towards a cure.

My hope is to inform everyone about the devastating effects of diabetes and the enormous toll it places on the economy. The combined efforts from fellow citizens and both state and federal government can and will help halt this terrible disease.