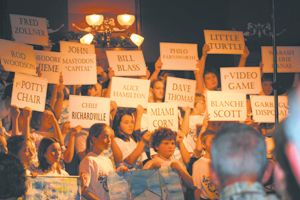 When a major two-volume history of Allen County was due to come off the presses, the first of its kind in almost a century, Donn P. Werling, executive director of the Allen County-Fort Wayne Historical Society, decided to put his feelings to music.

The result was a joyous musical production that he describes as “a journey of the heart into the heritage of this place we call home.”

Allen County sINg is the fourth musicale written by Dr. Werling. He used ballads written over the last decades as he and his wife restored their historic Allen County home of five generations.

Dr. Werling’s distinguished record includes several similar musicales, as he calls them. His interdisciplinary approach to history education has been inspiring teachers for many years. Each summer he conducts a teachers’ workshop on Great Lakes history that includes a production of his musicale Sweetwater Call. While director of the Henry Ford Estate, he created Henry Ford and his Uncommon Friends that described the family and friends of the man who launched an automotive revolution.

Allen County sINg featured a special appearance by Federal District Judge William C. Lee. “Being in this production means much to me,” says Lee. “It represents a celebration of the culmination of an enormous effort on the part of many people to bring the book to fruition.”

The production of Allen County sINg was made possible, in part, through a grant from the Community Foundation of Greater Fort Wayne.

Allen County sINg was a celebration of the people, places, events, and even the animals that have played a role in our local Allen County history. Anthony Wayne, Chief Richardville, Johnny Appleseed, Farnsworth, mastodons, portages, rivers and the Wabash-Erie Canal were just a few of the topics that inspired the songs and lyrics in this magical, musical program.

All of this was interpreted in partnership with two other local and highly renowned cultural organizations. The Fort Wayne Children’s Choir was represented by its Treble Choir; an intermediate group of singers, in grades 4 to 8. Its artistic director Fred Meads was pleased to be part of this event because it provided “the Fort Wayne Children’s Choir members a historical lesson through music, and they were excited to share this lesson with the community by collaborating with area cultural and arts organizations.”

Another organization vital to the success of this program was the Fort Wayne Youtheatre whose artistic director Harvey Cocks Jr. was responsible for working out the staging. “To have the opportunity to play a part in the creation of Allen County sINg was an honor and a privilege,” says Cocks. “It was the icing on the cake for this lover of Indiana history.”

Allen County sINg premiered with a gala dinner performance on Friday, November 3 followed by public performances on Saturday and Sunday to sold-out crowds.

As a contributor to this project, The Waynedale News was invited to share in the gala event celebrating the publication of the Allen County History Book. The Waynedale News is looking forward to holding in their hands what will be an achievement for a generation or more.

After three years, what was originally envisioned as a single 800-page book grew into nearly twice the initial estimated page count. It features history of Allen County as well as over 1,000 local family, churches, schools, organizations and business histories, tributes and memorials, and never-before-seen historic photos. It is the most comprehensive history of Allen County in over 87 years.

“The last definitive narrative history of Allen County was published by Bert J. Griswold in 1917,” says John Beatty, bibliographer and reference librarian for the Historical Genealogy Department of the Allen County Public Library and the chair of the History Book’s Narrative History committee. “Though many pictorials and topical histories of Fort Wayne and Allen County have been published since the Griswold book, none have been as comprehensive and narrative in nature.” “Our goal was to publish a historically accurate resource for historians and genealogists while providing Allen County families with a cherished heirloom to pass down for generations to come.”

The Allen County History Book was published by MT Publishing, an Evansville-based publishing company, which has published numerous county history books throughout the state, but none as comprehensive as this one. It is said to even be the most complete/largest history book in the nation. This two-volume set may be purchased at the Allen County History Center Gift Store, 302 East Berry Street, Fort Wayne.