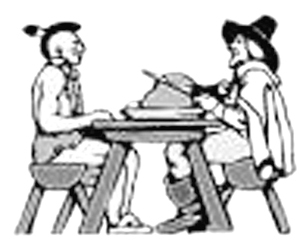 We grew up in Waynedale in the 50’s and attended Waynedale Elementary School. Thanksgiving at our house on Old Trail Road was traditional…meaning…we had a bountiful feast of turkey, cranberry sauce, mashed potatoes, homemade noodles and lots of pie and graham cracker pudding. And then after a hopefully short grace we would dig in and eat until we were stuffed.

The teachings at Waynedale School about the first Thanksgiving at the Plymouth Plantation in 1621 were also traditional. The pilgrims, led by Miles Standish, wanting religious freedom, sailed to the new world, befriended the Indians, led by Squanto, and together they had the first thanksgiving. They all lived happily ever after.

It would be interesting to go back to that era and re-live that first thanksgiving. It is impossible to do that, but we do have a lot of information on those early settlers called Pilgrims. And also on the Native Americans that helped the Pilgrims survive after their first disastrous winter in 1620.

In England the majority of Englishmen looked on the Puritans as religious dropouts who intended to found a new nation completely independent from non-Puritan England. They believed in the imminent occurrence of Armageddon in Europe and hoped to establish here in the new world the Kingdom of God, as foretold in the book of Revelations. They strove to “purify” themselves first and then everyone else of everything they did not accept in their own interpretation of the scripture.

And the Native Americans, what were they really like? The tribe encountered by the first Pilgrims were the Wampanoag. They were members of a widespread confederacy of Algonquian-speaking people known as the League of Delaware. For six hundred years they had been defending themselves from the Iroquois. For the last hundred years they had been having encounters with European fishermen and explorers, including European slavers, who had been raiding their costal villages. They were part of what modern day anthropologist call the Eastern Woodland group.

These Indians of the Eastern Woodlands called the turtle, the deer and the fish their brothers. They respected the forest and everything in it as equals. The Wampanoag’s also treated each other with respect. Any visitor to a Wampanoag home was provided with a share of whatever food the family had, even if the supply was low.

The Wampanoag’s moved several times during each year in order to get food. In the spring they would fish in the rivers for salmon and herring. In the planting season they moved to the forest to hunt deer and other animals. After the end of the hunting season they moved inland where there was greater protection from the weather. From December to April they lived on food that they stored during the earlier months.

The Pilgrims landed in the new world in 1620 and set up camp. Maybe there should have been some information in the book of Revelations about how to survive in the wilderness, as the first winter didn’t go well for them. The wheat they had brought to plant would not geminate in the rocky New England soil. They were living in dirt-covered shelters, there was a shortage of food, and nearly half of them died during that first winter. Luckily for the Pilgrims, two native Americans named Samoset and Squanto were hunting together near their settlement. The Indians were surprised to see the group of Englishmen there trying to survive. They watched the Pilgrims for several days and finally decided to introduce themselves. Samoset walked into the settlement and said in English, “Welcome.”

That must have been a surprise to the Pilgrims. They had traveled across the ocean to the new world, which they thought was inhabited by savages, and one of the savages walks into camp and speaks to them in English.

The reason they could speak English was that Squanto had earlier become friends with an English explorer, named John Weymouth. Weymouth had taken Squanto to England and taught him to speak English. Later, after Squanto came back home to North America, he and others in his village were captured by a British slaver and sold to the Spanish in the Caribbean Islands. A Spanish Franciscan Priest befriended Squanto and helped him to get to Spain and later on a ship to England. Squanto found Captain Weymouth, who paid his way back to his homeland. Whew!…So about a year later Squanto and his friend Samoset came upon the Pilgrims, who were just barley surviving.

Squanto decided to stay with the Pilgrims for the next few months and teach them how to survive in this new place. He brought them deer meat and beaver skins. He taught them how to cultivate corn and other new vegetables and how to build Indian-style houses. He explained how to dig and cook clams, how to get sap from the maple trees, use fish for fertilizer, and dozens of other skills needed for their survival.

By the time fall arrived things were going much better for the Pilgrims. The corn they planted had grown well, and there was enough food to last the winter. They were living comfortably in their Indian-style wigwams and had also managed to build one European-style building out of squared logs. This was their church.

Captain Miles Standish, the leader of the Pilgrims, invited Squanto, Samoset and Massasoit (the leaders of the Wampanoags), and their immediate families to join them for a celebration. As the Thanksgiving feast began, the Pilgrims were overwhelmed at the large turnout of 90 relatives that Squanto and Samoset brought with them. The Pilgrims were not prepared to feed a gathering of people that large for three days. Seeing this, Massasoit gave orders to his men to go home and get more food. Thus it happened that the Indians supplied the majority of the food: 5 deer, many wild turkeys, fish, beans, squash, corn soup, corn bread, and berries. Captain Standish sat at one end of a long table and the clan-chief Massasoit sat at the other end. The Indian women sat together with the Indian men to eat. The Pilgrim women, however, stood quietly behind the table and waited until after their men had eaten, since that was their custom.

For three days the Wampanoag’s feasted with the Pilgrims. It was a special time of friendship between two very different groups of people. And did they live happily ever after? By 1636, the Pilgrims that had eaten with the Native Americans in that first Thanksgiving would be involved against them in what came to be called the Puritan War. But, the Thanksgiving meal continues as a great American and Native American tradition.