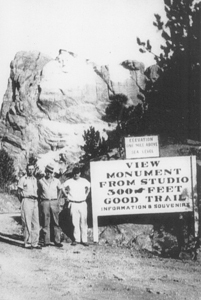 We went south into Kansas and then east into Missouri. Father needed some cash so we stopped in a small town so he could cash a check. We parked in the middle of the street, as was the custom in this town. Bill saw some watermelons for sale on an adjacent truck and decided he was hungry for one. He bought one for a dime and we helped him eat it. This wasn’t enough so we bought another one or two. We disposed of the rinds in another car that was handy for this purpose. About this time, father returned and saw the melons for sale. He asked the price. For some reason we did not know. We were not anxious for more melon and we could say little without revealing our guilt. Anyway, he bought a couple, which we could eat for lunch. We drove out of town and stopped alongside the road for sandwiches and watermelon. We were not hungry but we had to eat something. Those melons became more and more inedible. We finally disposed of the sandwiches and it was time to cut the melon. I had all I wanted to eat. Harold wasn’t very hungry. Bill was ready for one more bite. It was then that father knew that something was up and the true story was revealed.

Later that afternoon, quiet reigned supreme. Father and Bill were asleep in the back seat. Harold was fast asleep on the right side of the front seat. I was driving. Missouri roads were flat with a flat ditch on each side. The road was higher than normal so that the winter snow would blow off and not drift. I was setting there holding that steering wheel probably going twenty-five miles an hour. Suddenly I noticed that the road was up there on the right-hand side. I, must have been asleep and was driving in the ditch. I pulled back on the highway just in time to avert a culvert that would have blocked our path. I didn’t even wake anyone. That dam Ford was so anxious to get home that it was willing to assume responsibility for the care of four sleeping men who were enjoying an afternoon nap.

We crossed the Mississippi River at Hannibal, Missouri. At last we were back in Illinois. I thought it was about time to quit for the day, but father thought we should cross the Illinois River before stopping. I argued that the ferryboats had quit for the night. At Griggsville, Illinois we learned that we might make the next one. We did.

The Bluffs on the east side of the Illinois River was where we pitched our tent for the last time on this trip. We ate our supper knowing that tomorrow night we could eat mother’s cooking at home. We went to bed with equal fervor. We had hardly gone to sleep when some thunder in the southwest woke us up. Almost immediately the heavens let loose all the water that had been stored up for such events as this. Our tent was located in a nice little draw. It was a nice place for water to rush through our beds and everything we had before we could move. We got wet to say the least. When the rain finally stopped we hunted for a place to sleep. Harold and I slept in a barn across the other side of the road. Father and Bill slept in chairs with their heads resting on the table. The next morning we packed our wet luggage and headed for home for the last time. There were no events on that last day.

That Model T had taken us to Yellowstone Park and back. We were out twenty-eight days. We had twenty-eight flat tires. We had to buy four new wheels. The brakes were re-lined at least twice. We had a new rear-end. We overhauled the motor occasionally. There were probably many other small items that were duly taken care of. But it was a good car. It got us there and back without injury.

That Ford kept rolling from daylight ’till dark
And then at night we slept in a park
We didn’t know what there was to see
Until we went west in an old Model T.