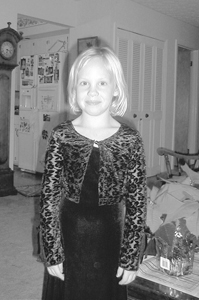 Think back to when you were in grade school. Remember what a big deal it was to get ready for the Christmas play?‑ Weeks before the grand production, parts would be assigned and rehearsals would begin. The old Waynedale School had a stage where we would practice. The very best parts, of course, were Mary and Joseph.‑ We couldn’t have anyone play the baby, Jesus, because none of us was small enough, although, I remember trying to convince the teacher, who was acting director, to use Gelaine Listenberger because she was the littlest kid in the whole school. Her dad had to make a box for her feet to rest on under the school desk because she was so short. Anyway, we had to use a bundle for the baby Jesus. Next in importance was to be one of the shepherds or an angel. I, personally, always wanted an angel part, but I never had a teacher that saw the wisdom of placing wings on me. I got to be a singer, though.‑ Not because I could sing, but because they would stand me next to Nancy Lee, who COULD sing.‑ I once saw an Andy Griffith episode where Barney couldn’t sing a note, so they stuck Gomer behind the curtain to do the singing for him, making Barney just move his lips. What a humiliation. I can identify with exactly how Barney felt. At any rate, I went to my children’s school plays at Christmas time and always sniffled into my Kleenex as they read their lines or sang. I always thought my children did the best job. I told my daughter, Betsy, to remember to keep her knees together sitting up on the stage, remembering the scolding I got from my mother for not keeping my knees together.‑ “I was embarrassed to tears,” she admonished, ” You know better than to show your panties to the whole world!”‑ Well, of course, I had not a clue that I had done this dastardly thing, but I did remember to make note of it when it came my daughter’s turn to be on that tricky elevated stage.‑ Well, things have changed now, and little girls don’t wear dresses to school. And, sadly, the schools are not allowed to put on Christmas plays, because we have to be sensitive to a possibility of a Muslim being in the school, or the audience, who would be offended. (And that’s another column!).‑ So, we now go to school to see the presentations of our children and grandchildren in a much different era.

Last week, we went to see Lulu in her Christmas presentation. All the songs that were sung had no mention of baby Jesus, or the wise men. None of the kids could be sheep or shepherds, but they did sing some pretty cute songs. Lulu was, of course, the most beautiful little girl on stage. Some things never change. But, after the play was over, and we were coming home, I began lamenting the fact of “things sure have changed,” and my grandson, Clay, said, “Well at least you didn’t have to be a Poppy!”‑‑ Well that cracked us all up, and I guess that each generation has its own memories of being on stage looking out at proud parents.

Well,‑those memories are forever part of my childhood,‑just as Clay has his memories of having to be a Poppy. Here is a picture of Lulu, the stunning platinum beauty, in her velvet black dress and clunky shoes which, thank heavens, she did not fall off. And Clay made us laugh on the way home. I’d say that was a pretty successful evening. Still… I sure miss the Mary, Joseph, and baby Jesus plays with the shepherds and wise men. I miss singing Silent Night, and all the other Christmas songs, too. I wonder why it was so necessary to change all that?‑ Christmas, after all, wouldn’t be Christmas without Jesus. And childhood is missing something without a chance to play a part in the Christmas school play.

Happy Christmas to all my Waynedale friends,
Mae