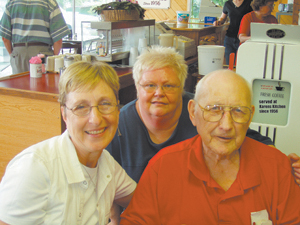 Thursday, June 10th a party was held at Karen’s Kitchen to honor Glen Stebing. Glen graduated from Auburn High School in 1938. He attended Manchester College, where he was an All-State guard in football, and graduated with a B.S. Degree in Social Studies and Physical Education. He enlisted in the Army Reserve in June of 1942 and was called to active duty in May of 1943. He did his basic training at Fort Bragg, North Carolina and was shipped to Camp Shanks, New York in November, where he was assigned to the 3712 Quartermaster Truck Company. They left for Europe in November of ’43. Glen spent seven months in Bristol, England and in June of 1944.

He drove the first truck off a boat onto Omaha Beach in Normandy. He was in the Battle of the Bulge, crossed the Ramagian Bridge with the 9th Armored Unit over the Rhine River and met the Russians at the Elbe River. He participated in the liberation of the Buchanwald Prison, and was with the First Army when they went to LaHarve, France. He was with the first troops into Berlin, with the American Sector. In October of ’45 he received orders to proceed to the South Pacific to meet First Army for the invasion of Japan, which is where he was when the A-Bomb was dropped.

He came home, attended Indiana University under the GI Bill, and was one of the first graduates of the new school of Health, Physical Education, and Recreation. He received his first teaching and coaching position at South Side High School in the fall of 1947, and spent 38 years as a teacher and a coach. Glen retired in 1985. He has been a member of the First Presbyterian Church for over 50 years. He belongs to the Masonic Lodge, the Shrine, Lions Club and American Legion Post 160.

Owner of Karen’s Kitchen, Pat Peddin, roasting Glen compared him to Ronald Reagan, as both have the ability to make people feel at ease while in their presence. Another gentleman stated that Glen makes the Energizer Bunny look lazy. Wayne Lodge 739 has named their lawnmower after Glen. Now they can say, “Has Glen got the lawn cut yet?” Mrs. Berger mentioned that if you didn’t want his honest opinion then you better not ask.

Mr. Butts reminisced about he and Glen’s time to together during the battle of the Bulge and was thankful for the time they have had together. “Kudos fall by the wayside but respect and admiration are timeless.” Stop in at Karen’s Kitchen any day around 2pm and you may catch Glen sneaking a donut.