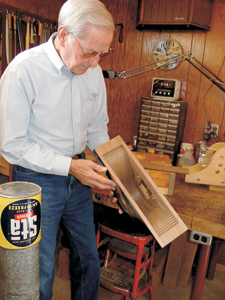 Harrison Hull was nineteen when he came back to Indiana. He was born in Dekalb County on Jan 27th 1920. He traveled with his family to Ohio and then to Tennessee, but Indiana is where he wanted to work. He traveled to Auburn Indiana and applied for a job at the Auburn Kroger. The manager said, “I don’t have any openings right now, but I like your looks. Come with me to Ft. Wayne and we’ll see if we can find you a job.” The Kroger store on Wayne Street was where he went to work.

While Harrison was working at Kroger, Evelyn Beck came in with some of her friends. “She was the most beautiful girl I had ever seen,” commented Harrison. A friend of Harrison’s, Jim Kelly, told him he knew the Beck girl, and could introduce him. The introduction proved to be a life long partnership.

Harrison was wild about airplanes so he traveled to Baer field to take the Air Cadet test to become a pilot. Harrison washed out due to his color blindness. He was crushed. “You won’t let me fly your planes but I’ll bet you’ll let me dig your ditches,” complained Harrison. Yes we would, replied the Lieutenant, but if you really want to be near airplanes, you should join the United States Army Air Force (USAAF). Within two weeks in November of 1941 Harrison had enlisted.

He did his basic at Keesler Field in Biloxi Mississippi. From there he went to Municipal Stadium in New Orleans and to Isaac DelGado where he completed Mechanics Aviation School. After Mechanics school he was lucky enough to get back to Baer Field where he enjoyed two wonderful weeks with his girlfriend Evelyn. He then went to Selfridge Airfield just north of Detroit. From Selfridge, Harrison was sent to the 61st Fighter Squadron at Bridgeport Connecticut and then to England where he served from Jan ’43 to Sept of ’45. His job was to prepare P47’s for flight missions, which included bomber support. Harrison’s planes completed over 100 missions with no mechanical errors. For this he received the Bronze Star for meritorious service.

Each flight crew was made up of, a pilot, a chief, an assistant chief, and a chief of armor. The armor chief would check each of the eight machine guns, which were mounted four per wing. Harrison’s crew took care of one plane at a time. On D-Day they were called up at midnight to ready the planes which took off at first light. The pilot observed later that, “If boats were stepping stones I could have walked across the Channel today.” The Germans got some of his pilot’s, and lately father time has been taking the rest.

After the war, Harrison came back to Fort Wayne to his girlfriend Evelyn. “When we gonna get married?” he asked. Evelyn answered, “You haven’t asked me yet”. Harrison had just imagined that the marriage question was of assumed consent. Harrison replied, “You’ve been sending me letters for four years, if you aren’t serous you better tell me right now.” He convinced Evelyn to marry him shortly thereafter.

Kroger offered him his job back, but he wanted to stay in the flying business. He went to work at Smith Field with Consolidated Aircraft Repair, and then completed courses to achieve his aeronautical & engine repair licensee. Harrison learned to fly and worked as an aircraft mechanic and pilot for Central Soya, Essex, and North American Van Lines. In 1959 Harrison changed directions and began a career as a life insurance agent. He retired in April of 1985 as VP of Mutual Securities.

Harrison and Evelyn have two children, both boys. They have four grandchildren and 1 great grandchild. Evelyn passed away about four years ago.

Harrison now builds clocks to keep himself busy. He took me to his workshop on Thiele Road and showed me how to bend the wood he uses in his masterpieces. “My Grandson came to me with a woodworking project a few years ago. He wanted to make a clock, so we researched the problem at the library, and it just evolved into a hobby.

I’ve been blessed with a full life,” commented Harrison. “If I had it all to do over again, I wouldn’t change a thing.”