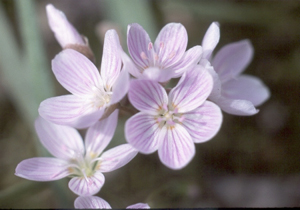 I have visited the Preserve several dozen times over the past years. I have seen it with the eyes of a professional botanist but, hopefully as well, with the eyes of one who simply loves nature. Fogwell can enchant; it can surprise; it can teach.

Before its rebirth as a nature preserve, this acreage had been part of the Fogwell family farm for three generations. As such, it carried them through good times and bad. The first generation of Fogwells sold some mature timber from the western half of the present day Preserve. During the 1920’s, the state Forester Charlie Deam encouraged the family to enter the woods in the “Classified Forest” program. This Preserve has had only minor disturbance over the 40-year period preceding its donation to ACRES, Inc.

Ecological succession, the recovery processes of nature, did much to return the area to its current condition-a species rich, lush flatwood community. It was in that form, as a mature second growth forest, that Glenn Fogwell and his sisters Mabel Corville and Mildred Klopfenstein, generously donated the land in 1976.

That brings us to the question “what is a flatwoods and who makes their home there?” Southwest Allen County lies within Indiana’s Central Till Plain natural region. The region stretches from south of Indianapolis to the Fort Wayne area. Overall it is characterized by relatively flat topography shaped by the advance and withdrawal of glacial ice. Fogwell Forest developed on the gently undulating topography of this plain. Some areas of the Preserve form shallow “vernal pools.” These spots fill with water in the spring but dry out as the season progresses. The trees in vicinity of the pools tend to be swamp white oaks. These are often tall, straight individuals more than 20″ in diameter. The herbaceous growth around the vernal pool, though sometimes thin, is dominated by sedge species and ferns such as sensitive fern, several woodfern species, and lady-fern. With very slight increases in elevation, the composition of the woods and herbaceous flora changes markedly. The dominate trees become sugar maple and old American beech. The mixture also includes many other hardwood species such as red oak, white oak, and black walnut. Furthermore, one encounters a rich spring wildflower display that defies description. There can be drifts of large-flowered trillium, toothwort, wild geranium, wild ginger, Jack-in-the-pulpit, and forest phlox, to name a few.

28 acres is enough to provide refuge for many plant species. My records now list more than 240 vascular plant species in and adjacent to the Preserve. The area is particularly diverse in fern and woodland sedge species. Longterm stewardship of the forest can maintain these riches. The job will be made easier as ACRES, Inc. succeeds in acquiring an additional buffer provided by nearby wooded and unwooded areas.

As a botanist, I am impressed with the beauty of this forest carrel. I am also inspired by the caring that goes into the preservation of wild places. Through the legacy of three generations of Fogwells, coupled with the vision of the present, this flatwood preserve promises long-lasting enjoyment for many generations of human visitors.