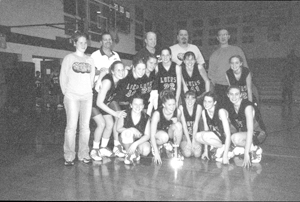 Bishop Luers freshman girls basketball team traveled all the way down to Indianapolis and put their undefeated record on the line in the Bishop Chatard Invitational Tournament. By drilling Greenfield 44-10 in the afternoon game, Luers earned the right to take on Chatard in the evening championship game. Now the Lady Knights would find themselves in the basketball fight of their young lives! Chatard was fast, tall and extremely aggressive, especially on boards. But the Lady Knights were equal to the challenge, plus, they had an ace in the hole, Angie Conroy. Angie, who helped lead St. Therese to the CYO, Blue League Championship two years ago, was on fire! So, with Luers trailing Chatard by three precious points with less than a minute to go, Coach Neal Schaab turned to Angie. He called out a play for Conroy to get the ball behind a triple pick, for a three point shot. Schaab nailed it, to tie the game! Then after Chatard failed to score on their next possession, Angie was called on again to deliver. She drove left baseline and got fouled. With only 24 seconds left, she calmly swished both free throws to put Bishop Luers in the lead. The Lady Knights defense did the rest, capturing the freshman championship trophy, 38-35. Miss Conroy scored 18 points, the 3rd highest Luers freshman total in the past 10 years! Angie hit two 3 pointers and was a remarkable 8 for 9 from the free throw line. Every one of those baskets was needed to propel Luers to the tournament championship, and to extend their over-all record to 9 wins and no loses. Katie Cooper (St. Therese Parish) and Carolyn Harless, (St. Al’s Parish) also were solid contributors to the team.