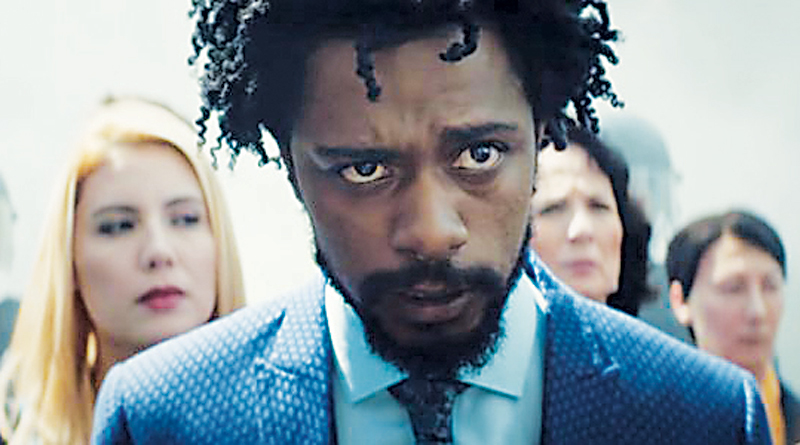 This week, I watched Sorry to Bother You in the theater and Birthmarked on Netflix. One movie I loved; the other I’m advising you not to waste your time on.

In Sorry to Bother You, Cassius “Cash” Green (Lakeith Stanfield) needs a job, any job, and lands at a telemarketing firm. He struggles to pay his bills until a coworker, Langston (Danny Glover), gives him the tip that he should use his white voice (David Cross). The white voice is not merely Cash’s “professional voice”, it is aspirational, an approximation of a Fortune 500 CEO. From there Cash, quickly rises to Power Caller status. Meanwhile his fiancee, Detroit (Tessa Thompson) is busy working on her gallery opening and protesting Worry Free, a company that promises a lifetime of food and shelter in exchange for what amounts to slave labor. Furthermore, professional protester Squeeze (Steven Yeun) and Cash’s friends are trying to start a union at the telemarketing company. When Worry Free’s CEO, Steve Lift (Armie Hammer), makes Cash an offer he can’t refuse, his whole life and value system are thrown into question.

Sorry to Bother You is both “woke” and outrageously funny. The social satire is strong, but also paired with a heavy dose of silliness. The central gag of the film–comedian David Cross providing a voiceover “white voice” for Cash is startling at first and then continues to be funny throughout. When other white voices pop up, it adds to the humor. In addition, the film features a healthy mix of visual humor, slapstick, and wordplay that, added to the satire, had me laughing out loud. The film also features a sci-fi twist, which came as a surprise to me. The dystopian vision that the story works with adds to the racial element to engage questions about labor, class, and human rights in a way that is more playful than pedantic. This film is destined to become a cult classic because of the wonderful interplay between the funny and the thought provoking elements.

The cinematography of the film is driven largely by the presence of Detroit, a visual and performance artist. Her statement earrings, wardrobe, and art anchor the film in an edgy, colorful aesthetic that also draws on 1970s fashion, club culture, and office satire. Through these elements, the film portrays the workplace as sterile and numbing, a less extreme version of Worry Free, and the world that Detroit and Cash live in as vibrant and textured.

The acting in the film is also outstanding. As Cash, Lakeith Stanfield is anxious and sympathetic, making him a character to root for, even when he makes questionable decisions. Detroit is the moral center of the film, but she is complicated and opinionated, a combination that Tessa Thompson makes endearing and gentle, rather than hardcore.

Overall, the film is masterfully made. Because it is satire, it is not going to be everyone’s new favorite movie, but the craftsmanship and the humor certainly make it worth a try. I rate it 4.5/5 stars.

Sorry to Bother You was written and directed by Boots Riley. It runs 1 hour and 45 minutes and is rated R for pervasive language, some strong sexual content, graphic nudity, and drug use.

Birthmarked follows scientists Catherine (Toni Collette) and Ben (Matthew Goode) as they conduct an extensive experiment, trying to get to the root of the nature vs nurture debate by raising their children, Maya (Megan O’Kelly), Luke (Jordan Poole), and Maurice (Anton Gillis-Adelman) contrary to their probable genetic gifts and flaws.

Birthmarked aims for the style and humor of a Wes Anderson movie. It’s a little bit Moonlight Kingdom a little bit Royal Tenenbaums. It is not, however, as beautiful or as funny or as weird as an actual Wes Anderson movie. Just watch one of his instead, if that is your sort of film. If not, do not bother with this one. The story here is bland, the characters are not quirky enough, and, as with Hereditary, Toni Collette can act her heart out in just about any movie, but her performance alone does not make a movie good.

Birthmarked was written by Marc Tulin and directed by Emanuel Hoss-Desmarais. It runs 1 hour and 30 minutes.