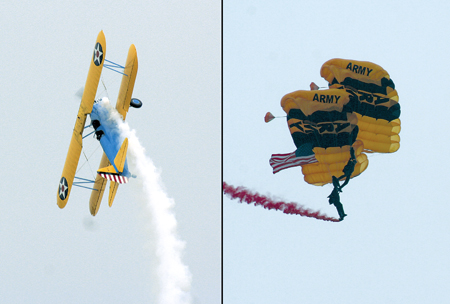 That wasn’t thunder you heard from the sky over this past weekend, it was the sound of the many aircraft soaring, looping, and spinning over Fort Wayne International Airport. Even though the clouds and precipitation stuck around for most of the event, The 2012 Fort Wayne Air Show, which was hosted by our very own Indiana Air National Guard’s 122nd Fighter Wing, impressed tens of thousands.

As you walked into the event you couldn’t help but succumb to absolute amazement. It was hard to pick a spot to begin your adventure. There were aircraft, big and small everywhere! In addition to the aircraft, were many aeronautical exhibits, information booths, and flight simulators.

Some of these static displays had waiting areas so individuals could board the planes and look at their cockpits. People lined up and patiently waited long periods for this opportunity. There were four giant planes that allowed a personal walk-through. This included the KC-10, KC-135, BOEING 737 and the massive C-5. The C-5 is among the largest military aircraft in the world! This particular exhibit allowed visitors to walk aboard and into the huge cargo hold. You could also climb a set of stairs into the cockpit of the massive aircraft.

There were also many smaller aircraft exhibits scattered about. These static displays included F-22s, P-51s, Warbirds, C-21A , HH-60 helicopter, and the A-10 Thunderbolt II . The A-10s are the iconic aircraft for The 122nd Fighter Wing.

They truly were all incredible!

Finally, the main event and what many desired, the air show’s performances. Lawn chairs were set up by the thousands as spectators gazed in awe of pilots and air teams performed amazing, aerobatic feats that some thought were not possible.

The U.S. Army Golden Knights Parachute team kicked everything off as they jumped in formation from 12,500 feet and landed right in front of the massive crowd!

Afterward there were multiple performances that included all kinds of aircraft. Almost all of these aircraft flipped, spun, and twirled at very low altitudes to a cheering crowd.

Finally the overwhelming favorite of the show was the F-22. The nation’s most advanced fighter jet.

The crowd was stunned as the F-22 flew by at low altitudes and performed a few acrobatic stunts. The sounds the fighter jet produced as it flew were incredible. This performance was truly a memorable one.

Amazingly this was the first air show in 13 years held in Fort Wayne and it was undoubtedly a positive experience for the entire community and surrounding areas. The common story that came away from this event boiled down to one simple statement: We just had a lot of fun!

As the air show officially came to a close, many are currently hoping that the near future holds another event of this spectacle. Let’s hope that this comes to fruition because of all the positives that this event created. And let us more importantly thank the Indiana Air National Guard’s 122nd Fighter Wing for a great show and for all the hard work they continue to do for us.