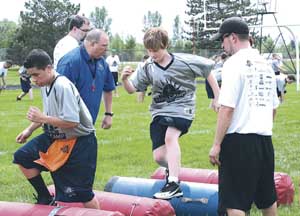 “For it is in giving that we receive.” St. Francis of Assisi

Investing in your hometown is a great way to give back. And that’s what it’s all about in the life of NFL player, Jason Baker. Jason, a 1996 Wayne High School grad, comes back to give back.

Giving back to Waynedale and the Fort Wayne community was what it was all about at the 6th annual Pro-Football Mini Camp at Wayne High School on Friday, Saturday and Sunday, May 13-15.

Enriching Waynedale and his wider community of Fort Wayne, Jason Baker started this year’s camp with a Coaches Clinic on Friday evening, inviting area coaches to come in for dinner provided by Hall’s Restaurants, then listening to guest speaker Chuck Martin from Notre Dame-Defensive Backs/Recruiting Coordinator, and other professionals, talk on health, safety, strength training, and, tools for coaching. “It’s a holistic approach, everything from health and nutrition to positive coaching skills,” said Baker.

Early Saturday morning, 150 boys, grades 6 – 8, lined up to register, receive jerseys and shorts, along with a draw-string backpack.

“Showing perseverance, going toe to toe with mother nature, they jumped on one of four buses headed out to help out the community of Fort Wayne,” said Baker. Leading by example, the punter for the Carolina Panthers was right there alongside the boys spreading mulch, unloading bags, raking, everything the boys were doing. Everyone spent a good part of the day helping and doing whatever was asked of them at varied sites, Community Harvest Food Bank, Associated Churches, Franciscan Center, Boys and Girls Club and SCAN, Inc. garden at IPFW.

A lot of ordinary people also give to the community for the sake of making the world we live in a better place. “When you donate your time, giving is good not only for the person receiving but also the one giving,” said one of the football players.

Participating in the community service project, not only gave the kids a free pass into the Pro-Football Camp but it also helped boost their self-esteem and a greater self-worth. It was the fact that, “helping others makes you feel good about yourself, because you are doing something for someone that they couldn’t do for themselves.” It was the smile from a thankful person watching out the door that showed the kids they were really making a difference in the community. That’s the greatest feeling in the world.

Later that day, nearly 300 smiling kids started their football training, one camp at Wayne High School, the other at Concordia High School. Baker bounced between the two schools.

Out on the field you could hear instructions from some of the best coaches in the area. “If a coach is good with linebackers, he’ll teach the linebacker drills…” Baker said. A Luers coach resounded, “Games are won by the linemen!” “Chest up! Head down. Snap down! On go-1 step on right.” “It’ll be a burner!”
The X’s and the O’s were covered—Stances, running, tackling, throwing and catching.

They played football until late afternoon and came back on Sunday for more.
Baker is grateful for the many blessings he has been given and his goal in life is to spread those opportunities to others. “Without a doubt, my favorite part of the camp is focusing on the young men to help turn them into contributors, good fathers, good husbands, good citizens.”

May this spirit live on through the example provided by Jason Baker.