As the Caribbean sun began to rise over the emerald sea it found Dave (everybody called him Shark Boy) fast asleep. Dave frequently slept topside under the stars, in case conditions suddenly changed and it became necessary to move the boat. Shark Boy had grown up in his father’s shadow and it was a rare occasion when either of them slept more than four hours at one time. Winds, tides, and sea conditions were constantly changing and therefore it required constant adjustments. The hungry monk awoke first and he woke up Dave by asking him how to operate the head. Dave snapped, “Only guests use the head; we use the cedar bucket under the sink.”

“We’ll pitch it on the way to Lovango,” said Dave. “We’re going to leave right now. The swells are too big to take the dingy, so we’re going to sail Dream Weaver there, and then go looking for something.”

“I’m hungry,” the monk complained, “Why can’t we get something to eat before we sail to Lovango?”

“Not now,” snapped Dave. “There’s homemade venison jerky above the refrigerator; we can chew that until we catch some fish for lunch.”

“I’d rather watch the foot race around Sandy Spit today than go to Lovango,” said the monk.

“That’s only because it’s a nude footrace,” said Dave.

“Nudity has nothing to do with it,” Brother Lamb huffed, with a hypocritical look of self-righteousness on his face. “I‘ve always been a big fan of track and field events!”

Dave gave him a hard and skeptical look, but once the monk was on the subject, he wouldn’t drop it. “By the way,” he asked, “how did a race in the nude ever get started?”

“According to Pop,” said Dave, “he took two guys and their wives on a sunset sail about a year ago. One was an orthodontist and the other was the CEO of an aluminum parts plant. The orthodontist was much taller than the CEO and after a few rounds of rum and coke he insulted the CEO by telling him that he had a ‘vertically impaired person’s attitude.’ The CEO, who took great pride in his physical condition, challenged the orthodontist to a foot race around Sandy Spit. After considering the challenge the orthodontist accepted the challenge but with the condition that they run the race barefoot and nude!

“The race was supposed to be a private affair between them, their wives, and Pop, but that night the wives, after several more rum and cokes at Boss Penny’s Bar, proclaimed they too would go nude during the foot race.

“The following day at high noon the orthodontist and the CEO removed their shoes, disrobed and at the sound of Pop’s cannon, both men were off and running in a flash of white butts. The CEO took the lead but they soon came to a place where the beach was comprised of nothing but small seashells and sharp rocks and the race slowed to a painful walk. The CEO still managed to finish first though, to the sound of clanging ships’ bells, Big Jessie’s air horns and Pop’s cannon.

“When both contestants shook hands after the race, the orthodontist still managed to get the final rub in, by quipping ‘Losing a foot race is a small price to pay for seeing your wife in the nude … again.’

“A tradition was nevertheless born that day, and every year since, Boss Penny’s regular customers get together and run a nude foot race around Sandy Spit — with one exception, of course, nowadays they wear sneakers.” 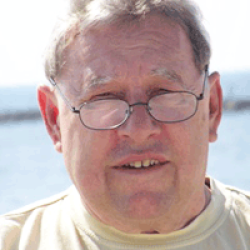 The author of the "Tales from the Caribbean" fictional column. He attended school at Waynedale Elementary, Maplewood, Elmhurst HS in the Waynedale area. John had 25 years of professional writing experience when he passed away in 2012.

The author of the "Tales from the Caribbean" fictional column. He attended school at Waynedale Elementary, Maplewood, Elmhurst HS in the Waynedale area. John had 25 years of professional writing experience when he passed away in 2012. > Read Full Biography > More Articles Written By This Writer