Snow has become the dreaded word that shouldn’t be uttered in polite company, but it is a definite fact that it is going to be with us for awhile. My mind has been drifting back to my childhood and reminiscing over the things we used to do during the long winters. (Actually, winters that were a lot like this one.)

After the evening chores were finished, which involved milking the cow, feeding the livestock, shutting up the chickens and bringing in water for the night, we could relax. I didn’t have to feed or milk, but many times I had to take two zinc buckets to the old pitcher pump in the Virginia office yard, fill them up and carry them back to the house.

It wouldn’t have been too bad but I always sloshed the water down both of my legs. We had a water table where the buckets were placed, and an old tin dipper that all of us used. The water was strongly flavored with iron, and I still remember that metallic taste. The boys carried water from the pond or creek for Mom to do laundry, as it stained the clothes slightly orange.

Supper was over–we ate lots of potatoes and brown beans, along with canned pork and mounds of biscuits or cornbread—good country cooking that nourished a country kid. We heated water in aluminum dishpans and washed the dishes, redded up the table and swept the dining room and kitchen floor, and we were finished.

We would gather in the front room (not living room) with our chairs pulled up close to the flaming gas stove, and beg for Daddy to “tell us a story.” The wind would be howling around the eaves of the house and trying to creep in around the window facings, but we were warm and cozy –and happy.

It didn’t matter how high the snow would pile up outside, we were content and secure in our old Jenny Lind house. We were all together—Mom, Daddy and all seven of us children. Most of the time Grandpa was there too, rocking in his favorite rocker, chewing his Brown Mule tobacco and spitting in a coffee can.

Daddy was a born storyteller. “Well,” he would begin, “I’ll tell you about Grandpa Green and the bear.” Then he would add, “Delphia, go pop some popcorn.” She would bring in a dishpan full of popcorn, seasoned with melted cow butter, and he would resume his tale.

He told this tale for the truth, and to this day I don’t know who Grandpa Green was, or how he fit in the family. How I wish I had questioned him more before the massive stroke destroyed his memory!

He would resume his story, “Many years ago, a long time before you were born, Grandpa Green and a group of men went into the woods to cut firewood for the winter. It was late in the fall, and they needed to hurry before winter weather caught them. They gathered up their crosscut saws, axes and other tools needed for the job, piled it on a wagon, hitched up the horse and journeyed into the woods.

“It was cold that day, and they built a fire to warm by as they worked. As they felled a big tree, it uncovered a bear’s den with a hibernating bear inside. It came roaring out and grabbed Grandpa Green as the other men panicked and fled. Horse, wagon and all, they left Grandpa Green to the mercies of the bear.

“It was a cold, hard winter, with one snowstorm after another. When spring finally came, and the men were able to travel, they went back to the place where the bear had attacked Grandpa Green. It was their purpose to gather up his bones and bring them home for a proper burial.

“When they got there, Grandpa Green came out from the bear’s den to meet them. His nose was bitten off, but other than that he was in good shape. It seems that he had killed the bear with the axe he was holding, and had wintered on bear meat cooked over the fire they had kindled.

“The branches of the tree they had cut sheltered the opening of the den, and he had stayed there the whole winter.” When Daddy finished speaking, we would be full of questions. “What did Grandma Green think when he came home with his nose bitten off?” we would ask. “I don’t know,” he would reply. “I figure she was just glad he was alive.”

We would beg for another story, but Daddy would tell us firmly, “It’s bedtime now.” He would take the Bible and read a chapter, and then we all knelt while he prayed. When he said “Amen,” we would take turns praying, from the oldest to the least. Sometimes the little ones would be asleep, and unable to recite their childish prayer, “Now I lay me down to sleep, I pray Thee Lord my soul to keep, if I should die before I wake, I pray Thee Lord my soul to take. And this I ask for Jesus’ sake. Amen.”

Two of those little blond haired boys are gone from the family circle, and oh! how we miss them. Their souls are with God.

That lightly draws its breath,

And feels its life in every limb,

What should it know of death?

I met a little cottage girl:

She was eight years old, she said;

Her hair was thick with many a curl

That clustered round her head.

She had a rustic, woodland air,

And she was wildly clad;

Her eyes were fair, and very fair—

Her beauty made me glad.

How many may you be?”

And wondering, looked at me.

“And where are they? I pray you tell.”

She answered, “Seven are we;

And two of us at Conway dwell,

And two are gone to sea;

“Two of us in the churchyard lie,

My sister and my brother;

And in the churchyard cottage I

Dwell near them with my mother.”

“You say that two at Conway dwell,

And two are gone to sea,

Yet ye are seven! I pray you tell,

Sweet maid, how this may be?”

Then did the little maid reply:

“Seven boys and girls are we;

Two of us in the churchyard lie,

Beneath the churchyard tree.

“You run about, my little maid,

Your limbs they are alive;

If two are in the churchyard laid,

Then ye are only five.”

“Their graves are green, they may be seen,”

Twelve steps or more from my mother’s door,

And they are aside by side.

“My stockings there I often knit,

My kerchief there I hem:

And there upon the ground I sit—

I sit and sing to them.

“And often after sunset, sir,

When it is light and fair,

I take my little porringer,

And eat my supper there.

“The first that died was little Jane;

In bed she moaning lay,

Till God released her from her pain;

And then she went away.

“So in the churchyard she was laid;

And when the grass was dry,

Together round her grave we play’d,

My brother John and I.

“And when the ground was white with snow,

And I could run and slide,

My brother John was forced to go,

And he lies by her side.”

“If two they are in Heaven?”

The little maiden did reply,

“But they are dead—those two are dead,

Their spirits are in Heaven!”

Twas throwing words away, for still

The little maid would have her will, 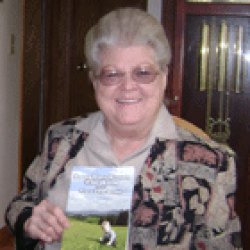 She writes the "News From the Hills" column. Born and raised in the country, and still lives on the same farm where she was raised. Has a sincere love for nature and the beauty of the hills. Began writing in 1981 & currently has three books published.