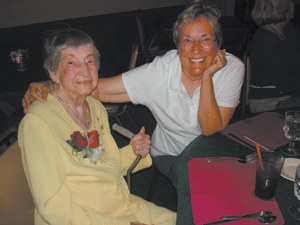 I have been reading Tim Russet’s book, Wisdom of our Fathers. I actually picked it up before he died, and it had languished in my stack of books to be read…sometime. I admire him greatly and his appreciation of his father made me start thinking anew about my mother. Not that she is not on my mind, or in any way forgotten from day to day, but I set myself to thinking about her life.

She is 92 years old now, and I have heard many stories about her life. She is the last member of her nuclear family including twelve kids. When she was a child, there was no electricity. In my early childhood, I can remember going to her sister’s house in Illinois, where they were still using oil lamps. For supper, my Aunt Ruth would go out and wring a chicken’s neck. I watched and learned the whole process. She would bring in the chicken’s body, having disposed of the head and the guts, and dip it in a pot of boiling water. Then she would grab handfuls of feathers until it was a bare pink chicken that she would pick over to make sure she had all the prickly things out of its skin (I can’t remember what they were called). Then she would take a meat cleaver and whack the hen in pieces, and put the parts directly into an iron skillet that had hot melted lard waiting. So, shortly she would have the table ready and we were eating chicken that had, a couple of hours before, been running around the chicken yard. My mom grew up with things that were basic, and in today’s world, seem primitive. They grew their own vegetables, raised their own livestock, and probably didn’t go into town for supplies but once a month. My mother got up early and milked cows, before she went to school. After school there were many chores, one of which was churning the milk. This separated into cream on the top and milk on the bottom. Some of the cream was churned into butter.

My grandmother attended my birth. I was born in a porcelain pot and put by the fire to keep warm. Thus were my mother’s early days. She has skills and knowledge that has long gone by the wayside. I think we have to admire someone who has those skills, as much as we admire our grandchildren for having the technological skills that they have. Just four generations have brought about so many changes it baffles the imagination.

My mother could do everything. She raised seven kids, and was the center of our world. We seldom went to a doctor, never went to a dentist (thank heavens for good teeth), and we were taught to respect adults. She had a wringer waasher in the basement, and hung all the clothes out to dry on a clothesline out back. She also had her ironing board down there and stood on cold concrete whilst she ironed our clothes. Nothing was permanent press, so she had to iron everything. Then she would separate any tears or buttons missing, and would put them in her basket to be mended or buttons replaced. I remember her sitting in the chair mending. That was probably considered resting time for my mother. She didn’t get to sit down much.

She would set a schedule for herself for each day of the week, and had things she had to accomplish each day. In between all that, she was a great cook, and was up early each morning making a big farm-type breakfast for all of us before we went to school. She had order about the house, and respect from her kids. Sometimes when we stepped on her last nerve, she would go out and get a switch, but that didn’t happen too often and only applied to my brothers.

She attended PTA meetings faithfully, and took us all to the Waynedale Methodist Church on Sundays. We had no air conditioning, no television, no automatic defroster on the “ice box” and yet I long for those days at times. Things had to have been so hard for my mom, and I took her for granted.

One thing that I have thought about from time to time, is that I made her life harder by wearing my dad’s white shirts. I would go in their closet and take one out and put it on, rolling up the sleeves to my elbows. It would hang just past my thighs, and smelled of fresh air and sunshine, always freshly ironed. Then, when soiled, I would carelessly throw it in the wash, and my mother had more laundry to do. It seems I lived in my dad’s white shirts. I think it was a fad, or perhaps it was a way of wearing “him.” At any rate, it didn’t make her life any easier. I had a pleated skirt that took a long time to iron, and I threw that in the wash all the time, too. I wonder how she ever kept up with all we put her through. Yet she has said many times, “I loved every minute of it.” We don’t take it literally, but it is the way she sees our lives together.

What a great mom, and how lucky we all were. It gets clearer all the time, and I find myself being my mother in the things I say to my grandkids. (Clean up that dog poop or you’re not bringing her over anymore). I probably spend too much time correcting their grammar, and making them put their dishes in the dishwasher and picking up after themselves, but what can I say? I am my mother’s daughter.