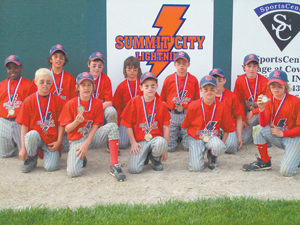 The Summit City Lightning Travel Baseball Team is going all the way…Cooperstown, N.Y.

The Summit City Lightning coaching staff and players were elated when they found out they were accepted to go and play at Cooperstown, NY. Some teams have a “bid” that would be passed down from a previous team that went to Cooperstown which automatically guarantees a spot for that team. The Lightning had no such luck…the team sent in the paperwork along with the down payment in hopes that the team would be accepted and sure enough the Lightning was in! The team is heading to Cooperstown, N.Y., this summer, August 1-8.

Since the creation of The Summit City Lightning in 2005 this team has quickly transformed into “one of the best” Travel Baseball Teams in the area. This is truly the “kids team” as they have selected everything from the team colors, team name, right down to the uniforms they wear. The Lightning has lived up to and exceeded the team’s motto of…sometimes you must fail to succeed.

This team has been carefully hand selected which consists of a talented young group of 13 boys. Each child and coach brings his own unique talent and character to the team in which the coaching staff works hard enhancing these boys’ individual strengths. The goal of the coaching staff is to excel these already gifted children in the game of baseball in hopes to prepare them for High School ball. What makes the Lightning especially unique is the fact that the boys represent different areas of the city and some of the newest members that have tried out and made the team come as far away as Huntington, Angola, Ossian and even Michigan.

The parents and the coaching staff are extremely proud of these boys. The team finished the season last year with around 70 games played which included the Tri-County league and tournaments. The team traveled to South Bend, Indianapolis, Muncie, LaPorte, Decatur, Huntington, Bloomington and Battle Creek, MI just to name a few. The Lightning ended the season with some nice hardware to take home 3 championships, 3 runner-up tournaments and 1 third place. The Lightning is a tough group of boys who will play four games, back to back, 90 degree weather, sun up to sun down and fight all the way to the Championship game with most of the time no buys.

The coaching staff and parents are currently working tediously seeking out sponsors for the upcoming season to assist with the Cooperstown, N.Y. trip as well as help for the 2008 tournament schedule. The Lightning has already received several tournament invites for the upcoming season. If you would like to watch the Lightning in action they have already started practicing for the upcoming season on Sunday nights at Extra Innings. The Lightning has served previous sponsorships proud in the past which include, PC Lock & Key, Summit Dental Group, Galen Leamon Construction, Insurit Inc., Tourkow, Crell, Rosenblatt & Johnson Attorneys at Law, Hoosier Woody Inc., TGI Fridays, Azar’s Big Boy, Minnie’s Diner and Jim Ks Pizza. If interested in helping out the Summit City Lightning with sponsorship please contact Manager Sean Moore at 436-6196 for more information.