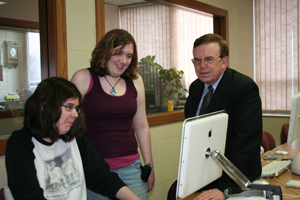 “It isn’t true that if you build it, they will come,” insists Dr. Dennis E. Hensley. “Even if you build something well, you still have to go out and bring people to it.”

In Hensley’s case, the “it” was a whole new concept in teaching college-level writing. Instead of a major with namby-pamby “creative writing” courses that allowed students to “express their inner voice,” yet never put a dime in their pockets, Hensley designed a professional writing major focused on making writers famous, rich, and influential.

In the autumn of 1997 Hensley launched his program at the campus of Taylor University Fort Wayne (TUFW), then with fewer than 500 students. Hensley’s solo initial class of “Freelance Writing” attracted only two students. Six years later, professional writing was an official major at TUFW, with 63 full-time students and more than 80 other part-time students taking Hensley’s writing classes as audit, guest, or transfer students.

It became the fastest growing major in the 157-year history of Taylor University,” says Admissions Director Leo Gonot. “The more that people heard about the success of the students in the program, the more it attracted other students—of all ages.”

Hensley, himself, was and is a living example of a successful writer. Besides holding a Ph.D. in literature and linguistics, he is the author of 6 novels, 43 nonfiction books (including 8 textbooks related to professional writing), more than 3,000 newspaper and magazine articles, as well as scripts, songs, reviews, and literary criticism. He has been a guest professor or writer in residence at more than 60 colleges, including most recently Oxford University in England.

Indiana University presented Hensley with its “Award for Teaching Excellence” in 1990. Ball State University gave him the “Dorothy Hamilton Memorial Writing Award” in 1993. The City of Fort Wayne gave him its “Bicentennial Gold Medallion” in 1994. Regent University’s Graduate School of Communication Arts named him “Distinguished Visiting Professor of English and Journalism” for the 2001-2 academic year.

When asked to explain the phenomenal growth of the TUFW writing program, Hensley says, “Students arrive here as nobodies. Within a year, they are published authors making serious money. I promise results, and I deliver.”

Indeed, he does! Leilani Wells, 22, graduated in May of 2006 with a degree in professional writing. During her years in Hensley’s program, she not only completed a bachelor’s degree in English, she also amassed a portfolio of writing credits writers twice her age seldom achieve.

“I sold a radio script to ‘Adventures in Odyssey’ for $1,500 when I was a sophomore,” says Wells. “I’ve made hundreds of dollars selling freelance articles to Focus on the Family Magazine, Purpose, Evangel, Online Professions, and dozens of other periodicals. I took Dr. Hensley’s classes, did what he taught us, and it worked. He also opened a lot of doors for me in the world of publishing.” Currently, Wells is a full time writing director at a performance center in Winona Lake, Indiana.

Kate Schmelzer of Illinois came to TUFW as an unknown. Within one year she had racked up more than 80 published articles and had signed an agreement at $300 a month to become a contributing columnist for Campus Life magazine. Johnny Boatright, a 28-year old member of the U.S. Air Force, started taking one writing course per semester from Dr. Hensley. Ten weeks into the “Fiction Writing” class, Boatright won a national short story contest, received a check, and had his story published in Writer’s Journal. Daisy Bailey decided at age 59 to come back to college as a writing student. During her first semester studying with Hensley, she had a short story published in a national magazine, and she also became a published book reviewer for two periodicals.

“This is the program I searched for and never found when I came out of high school in 1966, knowing I wanted to be a writer,” Hensley explains, lamenting that it took him until he was in his 30’s before he achieved significant success as a writer. “Now, my students enjoy all of the shortcuts I never had. I bring editors and publishers and literary agents right into my classes to tell the students what publishing is all about. I line up paying jobs for students as freelance writers with publications. Sure, they ride my coattails for the first few times out, but then they prove their merit as writers and don’t need me any longer. The toughest part is getting through that editorial door the first couple of times. It took me years to do that, but my students are able to do it within a semester. Often, let’s face it, it’s who you know. And now, at this stage of my career, I know just about everyone in publishing.”

That’s not an exaggeration. Hensley has numerous friends whom he has invited to speak at the TUFW campus who are among the leading names in global publishing. In 2004 Jerry Jenkins, who has sold 64 million copies of his Left Behind novels, spent an entire day at TUFW leading writing seminars for Hensley’s students. Holly G. Miller, editor of The Saturday Evening Post, taught full-day workshops in 2005 on advanced nonfiction writing. Davis Bunn, an author of international thrillers that have sold more than 10 million copies, spent a day as a guest lecturer at TUFW. In 2006 Hollywood movie producer Ed MacDougal taught specialty seminars on screenwriting at the campus.

“I took a seminar in crime and mystery writing,” recalls recent graduate Nathan Marchand, “and Dr. Hensley had David Pierce come to campus for a month as our teacher. Pierce has published crime stories by the dozens in all the leading mystery periodicals. Talk about studying at the feet of a master, that experience was just that. It was amazing!”

Because the inquiries are coming in so rapidly regarding the program, Hensley has expanded its offerings to meet specific needs. For example, TUFW has developed a one-year “Certificate in Professional Writing” that people can earn by taking courses either on campus or via computer as distance students. Additionally, a “Summer Honors Program in Professional Writing” is taught for one week each June by Hensley for high school students who want to see if professional writing might be the major they decide on for college.

“In the future, we also want to develop a graduate school degree in professional writing,” says Dr. Pam Jordan, chair of the TUFW English department, “but for now we have our hands full just meeting the demand for undergraduate classes.”

And what is Hensley’s motivation for all this effort? He says candidly, “Everytime I see one of my students receive a royalty check or get his or her name in print as an author, I understand what their initial joy is all about. I’ve been there. And now I get to relive it with them, day after day. There is a lot of personal satisfaction in helping people fulfill their dreams of becoming professional writers.”